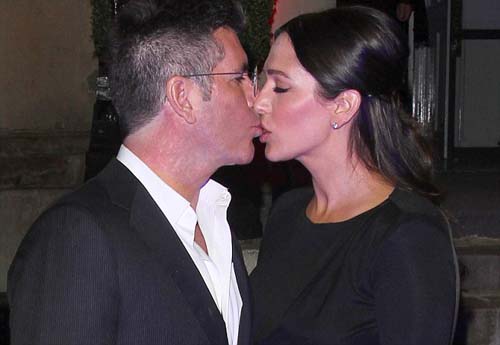 She gave birth to her baby son Eric less than six weeks ago. And while many new mothers would shy away from the spotlight, Lauren Silverman showed off her body confidence as she joined boyfriend Simon Cowell at the opening night of I Can’t Sing.

The American socialite, 36, looked stunning as she joined the music mogul at the star-studded launch of the new West End musical, based on his TV show The X Factor, at the London Palladium. Cowell was obviously impressed, embracing  Lauren Silverman in a very public show of togetherness for the cameras. It was a rare show of public passion for Cowell, who was previously never been known for sharing public displays of affection with his lovers.

But Lauren has obviously shown him the error of his ways, with the two seen kissing in their car on several occasions. And her winning look obviously charmed Cowell, with  Lauren Silverman showing her figure in a fitted black dress. The mother-of-two completed her look with a pair of Christian Louboutin heels, clutch bag and simple earrings. Simon Cowell looked dapper in a dark suit and chose to wear his glasses – which he usually forgoes on the red carpet.

The couple, who welcomed son Eric on Valentine’s Day, joined a host of celebrities at the glitzy opening night of the new musical, which is written by Harry Hill. The musical tells the story of a girl called Chenice, who has never heard of the talent show, but ends up auditioning for the show. The show stars former EastEnders actor Nigel Harman as a ‘Simon Cowell Cowell-like’ character.  Lauren Silverman and Simon already saw a preview of the show two weeks ago, but were back in the audience again on Wednesday for the official opening.

The couple have been in the UK since early March following Eric’s birth in New York last month. As well as introducing Eric to Simon Cowell mother Julie, he has also been making plans for the new series of the X Factor, after quitting the US version for a return to the UK show. He has also managed to convince Cheryl Cole to return to the judging panel. Among the stars in attendance at Wednesday’s opening night was Simon’s Britain’s Got Talent co-star Amanda Holden. She put on a very leggy display in a white Zara shorts, a Victoria Beckham blazer and lace top as she made her way up the red carpet.

Joining Simon Cowell was his former girlfriend Sinitta, who ended up showing a lot of cleavage in her plunging red gown. Bringing a taste of Hollywood to proceedings was actress Kate Beckinsale, who made a low-key entrance in a leopard-print coat over a black trouser suit. Before taking her seat in the theatre, she caught up with old friends David Walliams and property tycoon Nick Candy. Representing the X Factor family was Xtra Factor host Caroline Flack, who swapped her usual signature shorts style for a navy mini dress with oversized buttons.

Former X Factor contestant Stacey Solomon, who was third on the 2009 series of the TV talent show, looked slim in a white floral strapless number. There were several Loose Women stars in attendance including Carol Vorderman, Jamelia and Myleene Klass. TV presenter Myleene proved the perfect ambassador for her Littlewoods fashion line in a black foil-print dress from her latest collection. Carol Vorderman suffered a rare fashion faux pas in her red leather leggings and red shoe boots.

Meanwhile, former pop star Jamelia showed off her stunning figure in a jewel blue dress. With his fiancée Michelle Keegan busy filming in Salford, Mark Wright decided to bring his older sister, TOWIE star Jessica as his date. Jessica showed off her year-round tan in a white mini-dress as she posed alongside her brother. -Dailymail

One Direction To Have 20 Bodyguards Each On Tour

Is This The Moment Lovebirds Calvin Harris and Taylor Swift First Met?