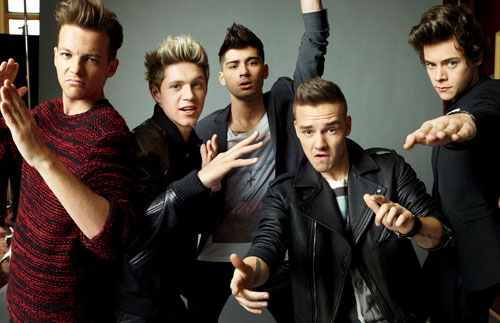 One Direction are enlisting 100 bodyguards to look after them on their upcoming stadium world tour. It’s thought Liam Payne and Niall Horan are particularly concerned about their safety. One Direction are taking extra precautions to keep their rabid teenage fans at bay by hiring 20 security experts for each band member.

It’s thought Niall Horan, 20, and Liam Payne, 20, are particularly concerned for their safety as the group get ready to kick off their ‘Where We Are’ world tour in the United States next month. A source told the Daily Star newspaper: “It’s mainly Niall and Liam who are starting to get really obsessive about security. Liam’s fears grew after two fans stole his pants in Australia last year. “Niall is getting more and more sensitive because of his panic attacks. “It’s an insane amount of security for one band, but considering the way crowds form around them, it’s necessary.”

Liam was left “embarrassed” last October when a group of teenage girls managed to steal a pair of his boxers that had been left to dry on the balcony of his hotel room in Sydney, Australia. He wrote on Twitter at the time: “Strangest way I’ve ever been woken up, When ur in bed butt naked an sum1 is trying to force open your balcony this is gunna be a strange day. “So happy I woke up cuz that s**t would have been so unfair “Hmmm somebody stole my boxers I’m so embarrassed. “So how this happened… I went in the sea in those hotel staff put them outside to dry sum1 climbed on and stole them just to set the scene. -Femalefirst