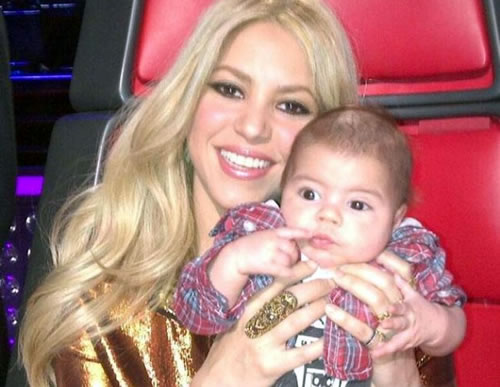 Shakira’s son is “very alert“. The 36-year-old singer gave birth to her first and partner Gerard Pique’s son Milan four months ago and loves seeing how he reacts to the world around him. She said: “He’s great. He’s so mellow, but he’s very alert, too. It’s like he knows what’s going on around him. He knows when someone comes in the room or comes out. He’s something.”

However, Shakira recently revealed she has fears about losing her baby weight. She said: “You wonder if you’ll ever get your body back. I’m still a few pounds over. But I do Zumba. Even during pregnancy, I did it almost to the end. But now with ‘The Voice’, I don’t have time. When I have a day off I want to be with Milan.”

The ‘Underneath Your Clothes’ singer added she is finding motherhood tough but loves the challenge. She said: “Nobody told me it would be this hard. It takes a lot of energy but I love it. There’s a lot of joy and fear. “Being a mother is surreal. It’s a whole new experience to me, and I’m just discovering it second by second.

“And having him here, it’s great, it’s a new thing, it’s another part of me and my loved one. He’s accompanying me so I don’t feel alone.” – Femalefirst