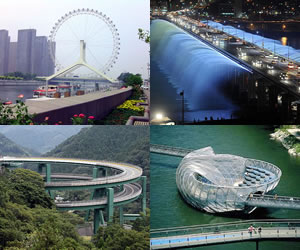 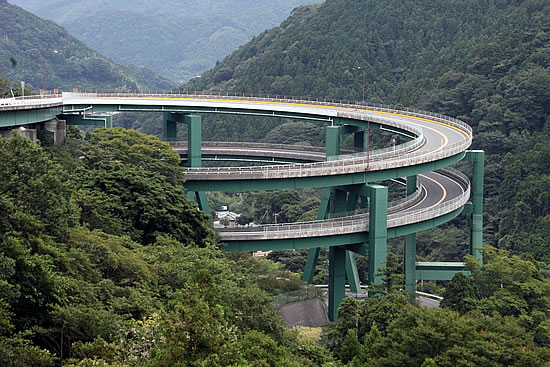 This bridge is one of its own kinds with two spirals. Each spiral is 1.1 KM and 80 meter diameter. The terrain where this bridge is situated is mountainous and the only way to enter the mountainside is this bridge. Other than this bridge it is too steep for any other solution. This bridge was built in 1981. People from Tokyo take this route on the weekends to enter the resort situated in the mountains. Kawazu-Nanadaru Loop Bridge is very tricky also and needs the driver to be very careful; the speed limit can be only 30km/h because of the diameter. 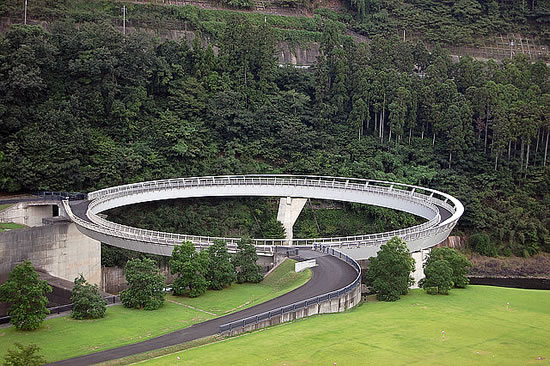 This bridge was built in 1998 and is known as the friendship bridge. It has a diameter of 80 meters. It is a pedestrian bridge designed by the architect Norihiko Dan. The same architect also designed the Hiyoshi Spring Spa Resort where this bridge is located. It makes the foot of the Hiyoshi Dam, Kyoto.

This bridge is located in Guangxi province and it is a covered bridge. It is also known as Yongji Bridge and Panlong Bridge. This bridge is specifically for Dong Minority Region. The Wind-Rain Bridge was completed in 1916. This bridge is a mixture of painting, corridor, Chinese pavilion and bridge. The bridge has three floors which is the most interesting feature and it has 19 verandas, 5 pavilions, 4 spans and 3 piers. The structure of the bridge is mostly made of wood whereas the roof consists of tiles. The total length of the bridge is 64.4 meters. 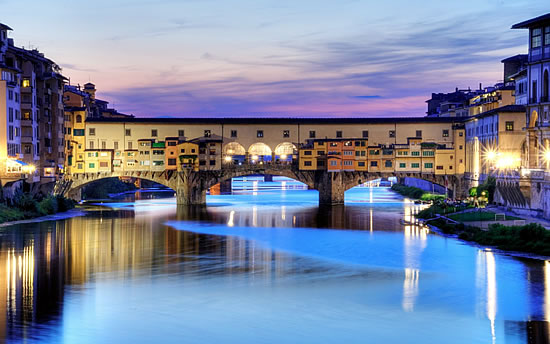 This bridge is located on the Arno River, Florence, Italy. The bridge is still known for shops made along the bridge. The tenants of these shops are art dealers, jewelers and souvenir sellers. This bridge is known to be one of the oldest bridges made of stone and also one of the oldest structures of a segmental arch bridge. The bridge first appeared in 996 which makes it part of the heritage and old structures which makes it all the more special. 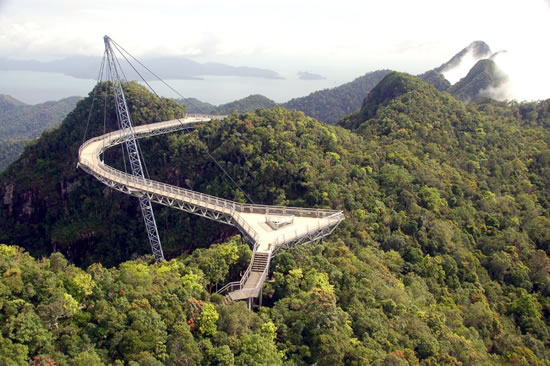 This is a unique bridge which can only be reached with the help of a cable car. Langkawi is an island famous among tourists. The bridge is a 125 meter pedestrian cable-stayed bridge. The bridge is located 700 meter above sea level.

The view from Langkawi Sky Bridge is spectacled giving an overview of Andaman Sea and Thailand’s Tarutao Island. There are signs found on the bridge saying leave the brdieg immediately in case of an electrical storm. 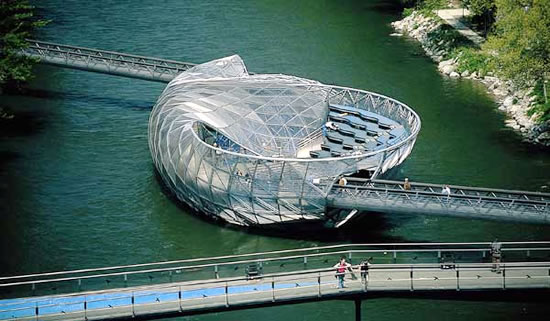 This bridge is an island itself because it offers a bar, coffee shop and an area to sunbathe. It is known Aiola Island. The bridge is located in the center of Mur River in Graz Austria. A New York based architect Vito Acconci designed the bridge and it was built in 2003. Since the construction is not too old the bridge is built on modern concepts of design.

This bridge gained a lot of popularity because the special features such as sunbathing area, bar and coffee shop. 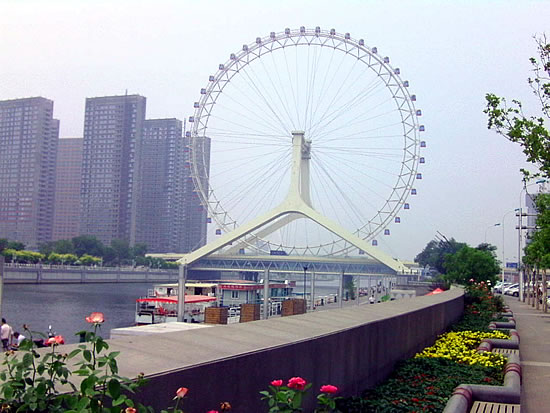 This bridge is unique in its own kind since it is the only bridge with a Ferris wheel built on a bridge. It is located on the Yongle Bridge on the Haihe River. This Ferris wheel has the capacity to take people 120 feet above from the ground. This bridge was completed in 2008. The Ferris wheel has 48 capsules and each capsule can cater to 8 persons. It takes 30 minutes to complete the circle which is a lot of time for the passengers to take pictures and enjoy the ride. 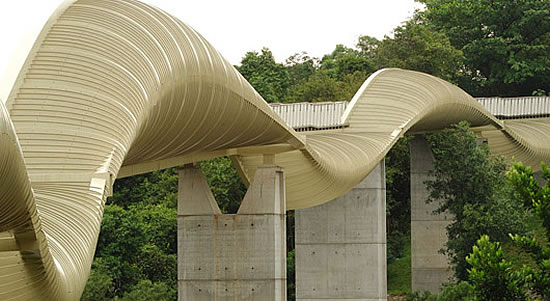 This bridge is the highest pedestrian bridge in Singapore; it has 12 storeys from the ground. It is a 900 ft long bridge. Another interesting feature of this bridge is that it connects the two famous parks Mount Faber Park and Blangah Hill Park. The structure of the bridge is unique with steal curves that rise over and under the deck. The waves are illuminated with LED lights every day from 7pm till 2am. 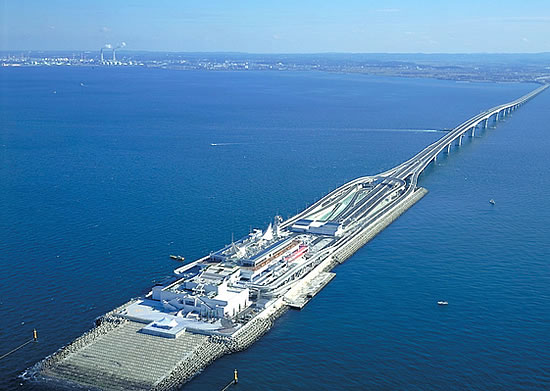 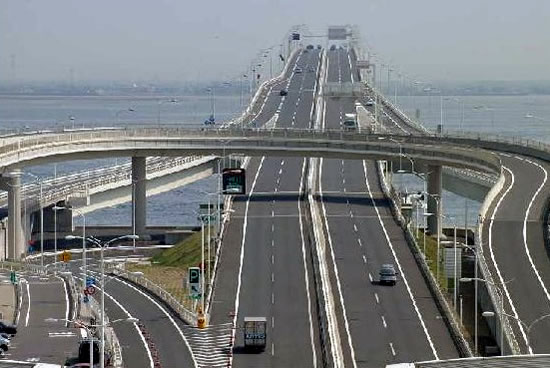 The Tokyo Bay Aqua-Line is also known as Trans-Tokyo Bay Highway. It is unique and interesting in a way that connects the city of Kawasaki in Kanaghawa and the city of Kisarazu in Chiba. It also forms a part of the national route. The complete length of the bridge is 14 km and it is also the fourth longest underwater tunnel in the world.

This bridge is a tunnel and a bridge at the same time and when the two interchange there is an artificial island built with shops, restaurants and amusement facilities. The bridge was completed in 1997. It took 31 years to complete this bridge and the cost was 11.2 billion USD. Another important feature is that this bridge has reduced the distance between the two cities from 90 minutes to 15 minutes. 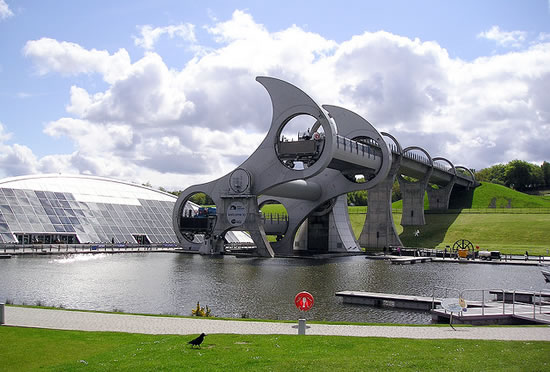 This bridge was able to restore navigability between the Firth, Clyde and Union Canal. It is a rotating boat lift connecting the two. Falkrik is a town in central Scotland. Locks are made to connect. 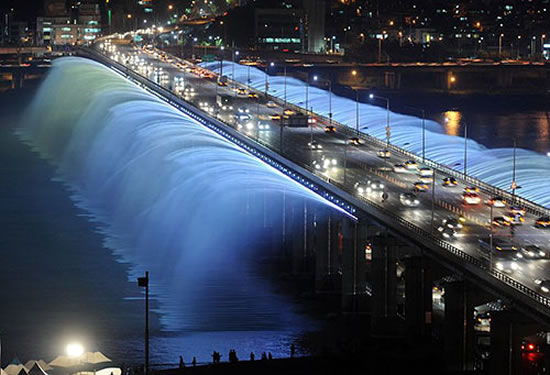 This bridge is in Seoul over Han River, South Korea. It is a double deck bridge. The bridge was completed in 1982. The lower deck of the bridge is for pedestrians and bicycles. Banpo Bridge has 38 water pumps with 380 nozzles; it has the capacity to throw 190 tons of water. It forms a beautiful sight at night when the water is falling from both the sides in to the river. 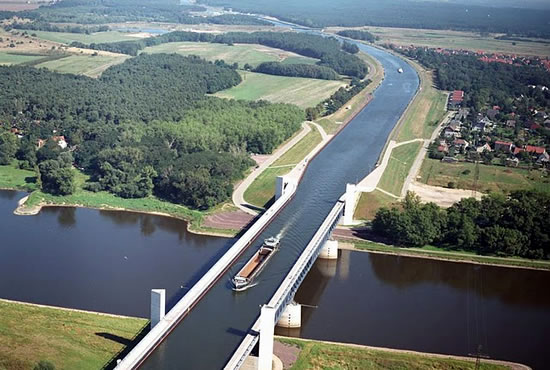 This bridge was under construction for 80 years. The bridge is 918 meters long. The bridge is one of its own kinds with the river in the middle and two roads on both side for pedestrians.

How to Plan A Destination Wedding: 11 Tips to Consider

Cambodia: A Village on Stilts