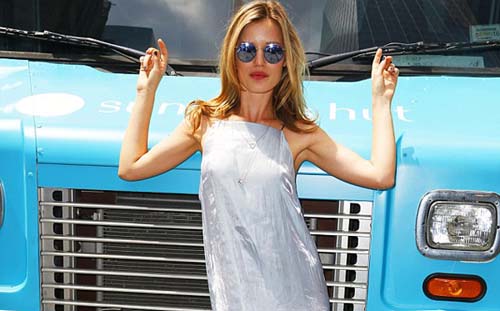 She’s the perfect physical mix of her gorgeous model mother and sexy old school rocker father; and as an added bonus, Georgia May Jagger seems to have inherited a sound work ethic. The 22-year-old model posed for hours near and around a bus in the hot New York City sun Tuesday to help launch the summer campaign for Sunglass Hut.

The young celebrity, whose mother is Jerry Hall, has been a model for the company for several months and has appeared at parties and other events to promote the sunglasses line. In one of the publicity shots, the willowy blonde posed with her lips partly open – exposing her signature gap teeth.

Georgia May has been modeling since the age of 16 and has posed for Hudson Jeans, Chanel and Versace. Since 2009, the London-born looker has been the face of cosmetics company, Rimmel. Together with other famous British models, including Kate Moss and Naomi Campbell, Jagger took part in the closing ceremonies of the London 2012 Olympic Games, representing British fashion. -dailymail