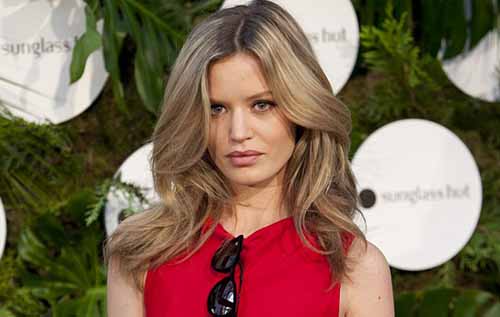 She has some impressive heritage with Jerry Hall and Mick Jagger. And that glamour clearly manifested in Georgia May Jagger as she stepped to a party in Spain on Tuesday evening. The sunning 22 year-old looked remarkable in a red, sleeveless dress which accentuated her flawless frame.

Mick Jagger’s youngest daughter looked effortlessly chic, her look with some strappy shoes and a pair of sunglasses. She also wore her hair in a classy centre parting, while sporting just a flash of pink lipstick. The bash, which celebrated the latest line of spectacles by Sunglasses Hut, was held in Madrid where hot, bright weather made it the perfect location.

Meanwhile, Georgia May Jagger has recently starred in the latest campaign for Sunglass Hut. Earlier this month, Georgia will have been celebrating after her half-sister Jade Jagger gave birth to her third child – a little boy with her husband Adrian Fillary. It’s some much needed good news for the Jagger family after Mick’s long-term girlfriend L’Wren Scott passed away in March.

Sir Mick Jagger has seven children from four relationships; daughter Karis, 43, with Marsha Hunt and Jade with former model Bianca Jagger. With model Jerry Hall, the rocker has Lizzie, 29, James, 28, Georgia May Jagger, 21, and Gabriel, 16, as well as son Lucas, 14, from a brief relationship with Brazilian TV presenter Luciana Gimenez.