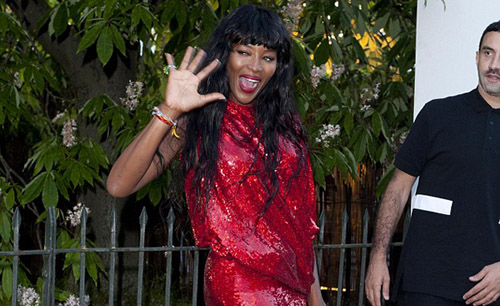 Supermodel Naomi Campbell brought some sass to the party when she arrived at the Serpentine Gallery Summer bash on Tuesday night. Fresh from a mini break in Ibiza where the 44-year-old has been sunbathing with fellow model Kate Moss, 40, Naomi pulled out all the stops at the annual event.

Dressed to kill in an all-glittering red sequin mini dress and matching strappy metallic heels, Naomi smiled and waved to her fans as she made her way into the party. She wore a slick of red lipstick to match her showstopper gown and styled her locks down and tousled. No doubt Naomi would have been in her element on the night with singer Pharrell Williams, actress Keira Knightley and TV presenter Alexa Chung all present.

While many of the guests chose to wear black, Gemma Arterton followed Naomi’s lead and turned up in a scarlet red two piece outfit which included an ab-flashing crop top.  Other supermodels that walked the red carpet on the night include Rachel Hunter and Cara Delevingne who both wore black dresses. While Cara’s number had a keyhole detail at the bust, Rachel chose a midi dress which had a racy thigh-high split.

Yasmin Le Bon’s daughter Amber also attended in a plunging purple gown which trailed to the floor and had an origami style detail.  Naomi Campbell Guests enjoyed a selection of cocktails from the Eclipse cocktail bars including the ‘Eclipse Watermelon Martini’, the ‘Crack Daddy’ and the ‘Summer Sling’ all made with Ciroc vodka.

The legendary catwalk queen spoke exclusively to Mail Online about her move into design having made her name walking for the biggest brands over the last twenty years. ‘I’ve been approached by a few brands to design a line for them, it’s something that interests me and I’m in negotiations,’ Campbell explained. -dailymail