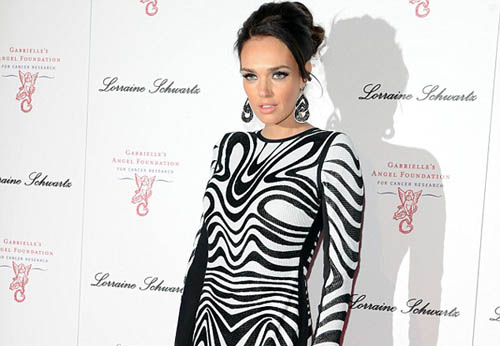 She recently jetted home from a luxury break in Morocco, but Tamara Ecclestone still appeared to be taking inspiration from her trip to the African continent when she stepped out on Wednesday. The Formula 1 heiress turned heads as she walked the red carpet in a striking, zebra-print number at the third annual Gabrielle’s Gala in London.

But it wasn’t just the star’s outfit that set tongues wagging on the red carpet,  the 29-year-old flashed her nape tattoo which reads: ‘JR I love you.’ It’s thought she had the tattoo inked on last year, marking the end of a trip to Miami with her then-fiancé in March 2013. The pair tied the knot in a lavish ceremony in the south of France just three months after her trip to the tattoo parlour and have since welcomed a baby girl, Sophia Ecclestone-Rutland, to the world just two months ago.

Not content with her heavily-sequined outfit, the mother-of-one also added a statement pair of silver earrings and circular clutch. Tamara Ecclestone was enjoying a night off from looking after her baby daughter Sophia and definitely went all out in the glamour stakes, completing her ensemble with classic stilettos. The beauty was accompanied by her husband Jay Rutland, who matched his wife in a black three-piece suit and white shirt.

Meanwhile the former Girls Aloud star, 28, kept her accessories to a minimum, while her mane of long red hair was worn down in soft waves. Nicola’s silky, floor-length number, which made her frame look slimmer than ever, was also teamed with a classic pair of nude heels. Sponsored by Lorraine Schwartz, the star-studded gala and fundraiser, organised by Gabrielle’s Angel Foundation UK, helps support blood cancer research initiatives in the UK.

The evening included a cocktail reception, dinner, auctions as well as a special performance from Rita Ora. The singer made sure all eyes were on her after stepping out in floor-length gold sequinned dress, complete with daring thigh split and plunging neckline. The 23-year-old’s metallic beauty also featured tie detailing around the waist, long-sleeves and a small collar. She tweeted beforehand: ‘It’s nearly show time! gabrielle’sGala LDN ohhhhhh yeeaaaaaahhhhh’, to accompany a photo of her band.

She was spotted arriving at the capital’s Old Billingsgate venue prior to the event, looking much more casual in a large basketball jersey and back-to-front baseball cap. It was hard to miss Rita’s pins in her tiny top, which she teamed with a pair of knee-high boots and her statement red lipstick. Host for the night Edith Bowman was also snapped as she headed into the building, who appeared to be carrying her outfit with her. She later stepped out in a simple black dress, with flared skirt and waist belt, complete with plunging split at the top.

The presenter took to Twitter before kicking off her job for the night, writing: ‘Thanks kennethsoh for the face and @themonostore for the dress.’ Lindsay Lohan, who was also one of the guests at the bash, energetically walked the red carpet in a plunging blue and green number. The short dress, which featured a sheer insert which ran all the way to her waist, was teamed with a towering pair of black stilettos.