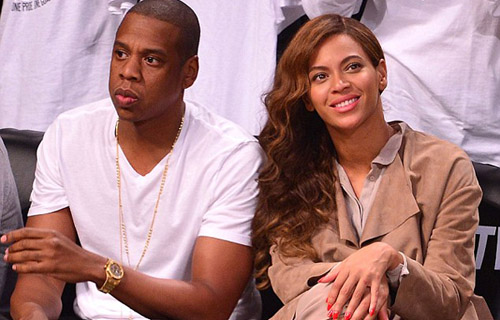 Fans are still trying to make sense of Solange viciously attacking Jay Z in the Standard’s elevator at a Met Gala after-party last week. And Beyoncé kept them guessing Saturday after displaying her faded wedding ring tattoo while sitting courtside at the Brooklyn Nets playoff game.

The red Roman numerals IV – the number 4 – were dull enough to spark speculation the 32-year-old pop diva has been lasering the symbol off. The 17-time Grammy winner inked the ‘IV’ on her left-ring finger in 2008 – due to her birthday (Sept. 4), Jay Z’s birthday (Dec. 4), and their wedding. The hip-hop power couple even named their two-year-old daughter Blue Ivy, which sounds a lot like I.V. The tattoo serves as Bey’s permanent wedding band when she doesn’t wear her $5 million 18-carat diamond Lorraine Schwartz bauble.

The 44-year-old rap mogul – born Shawn Carter – has a matching finger tattoo which appeared just as faded on Saturday. Even more curiously, Beyoncé shared a Tumblr snap a few weeks ago which showed her wearing a plaster over the tattoo. The good news for the Partition singer – if she is having it lasered – is red and black ink are the easiest to remove. It’s not an overnight procedure either – laser tattoo removal is a long and painful process done in 8 to 13-week intervals. Just ask Mark Wahlberg, who likened it to ‘getting burned with hot bacon grease,’ or Megan Fox who called it ‘incredibly, incredibly painful.’

Beyoncé has yet to comment on the shocking three-minute video in The Standard hotel’s elevator, which was leaked Monday. However, the Bow Down hitmaker did post four Instagram snaps of her 27-year-old sister and she shared a peculiar prayer. It read: ‘Lord, I lift up every one of my relationships to You and ask You to bless them. I pray that each one would be glorifying to You. Help me to choose my friends wisely so I won’t be led astray. Give me discernment and strength to separate myself from anyone who is not a good influence. I release all my relationships to You and pray that Your will be done in each one of them.’

The Holy Grail rapper appeared to get along great with Solange at her Coachella debut last month. The Crazy In Love couple – who have a combined 35 Grammys – also celebrated their sixth wedding anniversary last month. Jay & Bey will even embark on an 18-date co-headlining summer tour together – dubbed On the Run – which kicks off June 25 at Miami’s Sun Life Stadium. Last year, Forbes crowned the Drunk In Love pair the highest earning couple due to their combined $95m fortune. Jigga and Knowles – who are fast approaching the billion mark – earned $15m more than runners-up Tom Brady and Gisele Bundchen. And according to Radar Online, Jay Z and Beyoncé did RSVP to attend Kanye West and Kim Kardashian’s nuptials on May 24. -dailymail