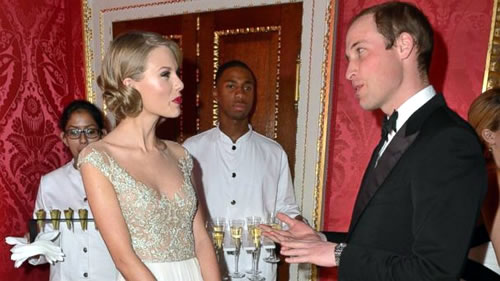 Today was a fairy-tale for Taylor Swift. Fresh off her big win at the American Music Awards on Sunday, Nov. 24, the “I Knew You Were Trouble” songstress jetted off to London for the Nov. 26 Winter Whites Gala in Aid of Centrepoint, where she came face-to-face with a real, honest-to-goodness prince charming — the Duke of Cambridge, Prince William. See more pics here.

Defying the cold weather in a gorgeous crystal gown (and no coat), Swift walked the blue carpet outside Kensington Palace, which had been completely transformed for the evening’s winter wonderland theme. (There was even imported snow!) “Oh my God, this is so incredibly exciting to be performing at Kensington Palace,” the “Red” singer told Us Weekly when she arrived. “With the snow, the lighting, the decorations, it’s all so Christmas-y. It’s kind of surreal, right? I’m at a palace!”

“I’m just soaking it all in. It’s going to be a great night,” she gushed. Asked whether she was nervous about performing for actual royalty, the country-pop superstar laughed and said, “I try not to think about that!” Later, after meeting Prince William, she exclaimed, “He’s so funny!”

The 23-year-old Grammy winner previously told BBC Radio 2 how much she was looking forward to the gala. “I’m really excited,” she said. “I’m really stoked. It’s the first royal engagement I’ve done, and I’m very, very honored.” Other stars in attendance at the event include Michelle Dockery, Colin Firth, James Blunt, and Jon Bon Jovi, who is slated to perform with his band following the private dinner. After the concert, the Duke (who attended sans Kate Middleton) will present the New Jersey-born musician with the Centrepoint Great Britain Youth Inspiration Award for his humanitarian work with the Soul Foundation, which helps families and people in economic despair.

The Winter Whites Gala in Aid of Centrepoint benefits the homeless charity of which the Duke is a patron. He met several young people from the organization at a reception before the event.