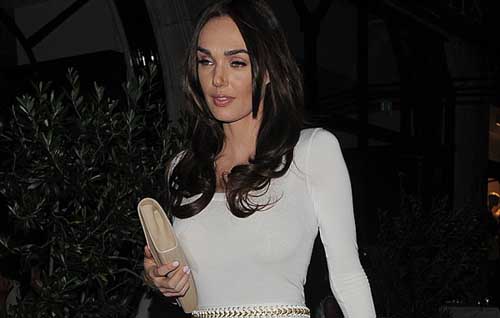 She has one impressive wardrobe and socialite Tamara Ecclestone impressed once again with the tight bodycon number she slipped into to dine out on Wednesday night. The 30-year-old mother-of-one looked incredible in the skimpy dress which had a golden chain detail on the skirt section, as she headed to Scott’s restaurant in London’s Mayfair.

Paying close attention to detail, the daughter of Formula 1 team owner Bernie Tamara Ecclestone wore matching shoes, choosing a gold mesh pair by Christian Louboutin. The see-through shoes showed off her perfectly pedicured toes which were a shade of red.

Tamara Ecclestone sat outside the restaurant with a couple of girl pals – she is rarely seen without her husband Jay Rutland on her arm Tamara made sure she was around to do the important things for her precious daughter, Sophia, and gave her a bath earlier in the evening. Clearly enamoured with her four-month-old tot, the pretty brunette posted a picture of a bottle of Love Boo conditioner which is specifically made for children, writing: ‘Our favourite time of day.’

She also encouraged her fans to do their bit for charity, offering up one of her Emilio Pucci dresses up for auction in order to raise funds for Great Ormond Street Children’s Hospital. Tamara regularly donates her dresses for the Tamara Gives Back campaign and the black mesh mini dress will no doubt attract interest from her fans. -dailymail