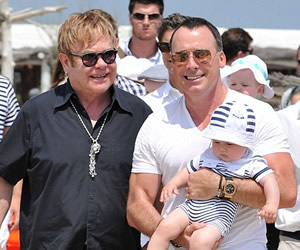 Civil partners Elton John and David Furnish are planning to become dads again by the end of this year.

Baby Zachary Jackson Levon Furnish-John will be having little brother or sister in few months as his dads Elton John and David Furnish have planned to get another baby through surrogate mother. The coming-to-be baby will have a different biological father but the blood dads will be Furnish- John.

According to a source, “David and Elton have never hidden their desire to extend their family, and believe the time is right for another child. By the end of this year, or the beginning of next year, there will be a fourth member of the John-Furnish clan.”