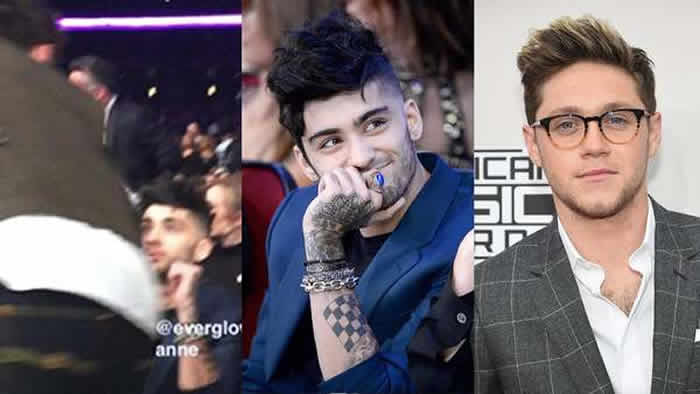 They may have spent five years at the top of the charts together – but it looks like things are a bit awkward between Zayn Malik and Niall Horan these days. The former One Direction band mates bumped into each other at the American Music Awards on Sunday night.

The very moment their paths crossed was caught on camera, and you can sense the tension when you watch it.

Zayn is sat watching the ceremony as Niall coyly approaches him with a look on his face that suggests he’s feeling a little awkward.  He walks up to Zayn, extending his hand to the Pillowtalk singer who barely looks up. Niall doesn’t even slow down and makes no attempt to stop and chat with his old pal or catch up on the good times. The quick handshake lasts less than a second, and as Niall quickly walks off, Zayn turns back to his conversation as if nothing has happened.

Zayn also took a swipe at One Direction as he picked up his AMA for New Artist of the Year. The 23-year-old asked if it was just his name engraved into the trophy and not his former band mates; Niall, Harry Styles, Liam Payne, and Louis Tomlinson. Speaking on stage at the Microsoft Theater in Los Angeles at the bash, he said: “Wow. This just has my name on it, right?”