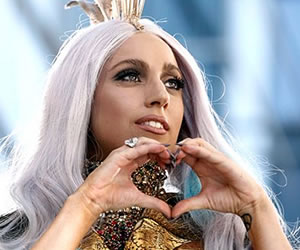 Lady Gaga’s little monsters have helped make her the most popular person in the Twitterverse!

The 26-year-old singer is the first one to have over 25 million followers on Twitter. The social media milestone didn’t go unnoticed by the pop star, who is currently on her Born This Way world tour. From the road Gaga tweeted: “#25milliontweetymonsters wow! I’m officially feeling like the luckiest girl in the world today.”

The other celebrities rounding out the top five most followed  are Justin Bieber (22.6 million), Katy Perry (20.5 million), Rihanna (19.8 million), and Britney Spears (17.2 million). President Barack Obama isn’t that far behind with 16 million. – Yahoo