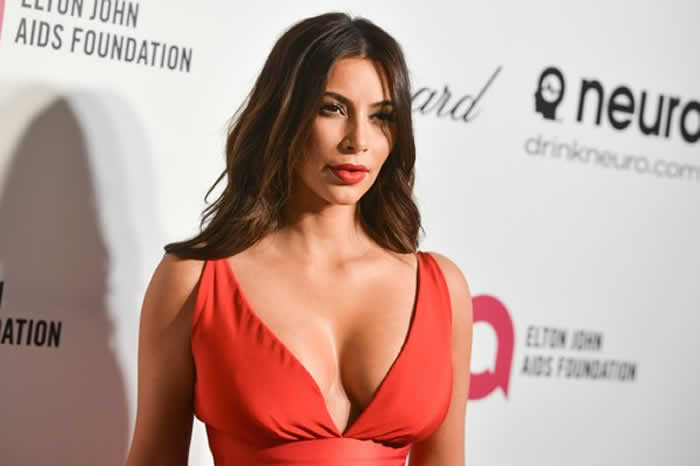 Model, actress, socialite and entrepreneur meet Kim Kardashian. You might know her as the wife of rapper Kanye West and mother to that little girl with the strange name, or you might recognise her as that famous reality television star who this year dyed her hair bleach blonde and got compared to Draco Malfoy numerous times.

10. She’s Going To Be A First In Madam Tussauds

Kim, famous for her full pout and mobile phone selfie-taking, will have her own wax model unveiled at Madam Tussauds London this July – in a new fully-immersive and realistic experience. The statue will be the ‘first selfie-taking’ wax figure in the world; guests will be able to get involved by sidling up to the figure, striking a suitable pose or pout and pressing the button on an actual phone which will be in Kim’s immortalized hand in order to take their own selfie. In keeping with Kardashian’s strict “three image rule,” which dictates that no more than three selfies can be taken in the same location, the statue will have a constantly changing backdrop. Book your tickets now, folks. You don’t want to miss out on this one.

9. She Had A Party At Michael Jackson’s Neverland Ranch

Kim dated T.J Jackson, Michael Jackson’s nephew, when she was 14 years old, and through this association, somehow wangled an amazing birthday party at the late singer’s home. The property includes an amusement park and a petting zoo. She told PEOPLE: “I had my birthday at Neverland Ranch. Who else can say that?…When you drove up there were baby elephants and chimpanzees in overalls, and there was all the rides. It was everything you can possibly imagine. The memories I have from that place will last for the rest of my life” Unfortunately, Michael Jackson wasn’t actually there. Perhaps he wasn’t invited.

8. She Was A Closet Organiser Before She Was Famous

Prior to becoming the famous lady she is today, Kim started off as a closet organiser, which is literally what is says on the tin. She organised people’s closets. The whole thing started off as one night of helping her godmother, Bernadette, empty out her wardrobe. Kim said of her humble beginnings: “Bernadette’s closet was massive and had so much stuff in it. I said to her, ‘You really need to clean out your closet.’ Well, we spent the whole night doing that.” Word of Kim’s organising skills spread throughout Hollywood, and very quickly, she amassed a long list of clients including Cindy Crawford, Serena Williams, Rob Lowe, Kenny G, Nicole Richie, and Paris Hilton.

7. Kim And Paris Hilton Have A History

While the sex tape scandal was what really brought Kim into the true lime light of stardom, she was also finally finding fame as a friend and personal assistant to none other than socialite Paris Hilton. In recent years, Paris has announced that she ‘made Kim Kardashian’, although it’s indisputable that Kim is now the more well known of the two reality stars. The pair have known each other since they were young, and in an interview early this year, Hilton said: “We’ve known each other since we were little girls, we’ve always been friends… It’s nice to inspire people, so yeah, I’m really proud of her and what she’s done though.” Still, it’s no secret the pair fell out in 2007/8 as Kim rose to fame with Keeping Up With the Kardashians in 2007 and Hilton’s reign of popularity seemed to decline. The hotel heiress said that she wouldn’t want Kim’s butt, calling it “gross” and adding, “It reminds me of cottage cheese inside a big trash bag.”

6. She Made A Cameo Appearance In How I Met Your Mother

It might have been for all of five seconds, but it was a Kim Kardashian cameo all the same – and in exactly the style we’d expect. Character Marshall (who is struggling to find the confidence to use the toilet at work) finds Kim on the front of a magazine, offering him support in order for him to be brave enough to do a number two in his office bathroom. The episode (‘Benefits’) aired as part of the fourth series in 2009. Other cameos throughout the episode included Kendra Wilkinson, Heidi Montag and Spencer Pratt.

5. She Gets Paid For Her Tweets

And we’re talking up to $25,000 per tweet, per brand. Not like a tenner for mentioning her best friend or something: nope, it’s big dollars all the way for a mention from Kanye’s wifey. But with 32.5 million Twitter followers, is it really so surprising that names like Reebok EasyTone and Carl’s Jr, the fast food chain, are paying Kim for the publicity? Reportedly, Kim Kardashian got paid a staggering $25,000 by Armani for her 140 endorsing characters, and this one tweet drove 40,000 visitors to the Armani website within 24 hours.
Lies? Or is there an essence of truth in it? Either way, the reality star certainly has a big audience at her finger tips, and it’s no wonder that brands are clamoring for her to give them a social media mention.

4. She Blow Dries Her Jewelry

Why, we hear you ask. Why indeed? Who has the time or patience to even consider doing that? Kim K, apparently. And she only does it because she doesn’t like putting her necklaces and bracelets and earrings and god knows what else on when it’s cold. She announced this fact, for no clear reason, to her Twitter followers, with the tweet: ‘Weird Kim fact – I blow dry all my jewellery before I put it on! I can’t stand putting on cold jewellery, it gives me the chills!’ If only we all had the time to entertain such diva-like endeavours.

Kim and it was her biggest regret. Kim may have felt confident about making a small step into the music industry at the time with Jam (Turn It Up), but it’s not something she’s proud about now. “It’s definitely a memory and it was a fun experience. We gave the proceeds to a cancer organisation. But if there’s one thing in life that I wish I didn’t do … I don’t like it when people kind of dabble into things they shouldn’t be. And that I don’t think I should have. Like, what gave me the right to think I could be a singer? Like, I don’t have a good voice.” Such a shame: imagine the Kimye collaborations we could have expected otherwise.

Collecting Vogue and Harper’s Bazaar magazines has been a hobby of Kim’s since she was young – that is, the vintage ones. She described her magazine collecting as having been going on ‘forever’, and has some from the 1940s, 50s, 60s and 70s (she was inspired by a friend who introduced the old mags to her, and was ‘fascinated’). Speaking of Vogue, Kim and Kanye shot a cover shoot for the magazine last year: Kanye was the first rapper to be on it; Kim was the first reality television person to be on; and they were the first interracial couple as well. Three cheers for Kimye.

1. She Was Accused Of Waxing Her Baby’s Eyebrows

In 2013, a posting of a photo of baby North was met with a whole lotta hate after fans stated the baby’s eyebrows looked a bit too perfect. Cue ‘waxing-gate’ – was Kim waxing her little girl’s eyebrows . The general consensus appears to be no. In response to the criticism, Kim tweeted: ‘Do people really think I would wax my daughters eyebrows so young? Come on, I’d wait until she’s at least 2 1/2!… I’m kidding!!! Its pretty sick for people to insinuate that I would wax my daughters eyebrows. They are thick, natural and amazing!’