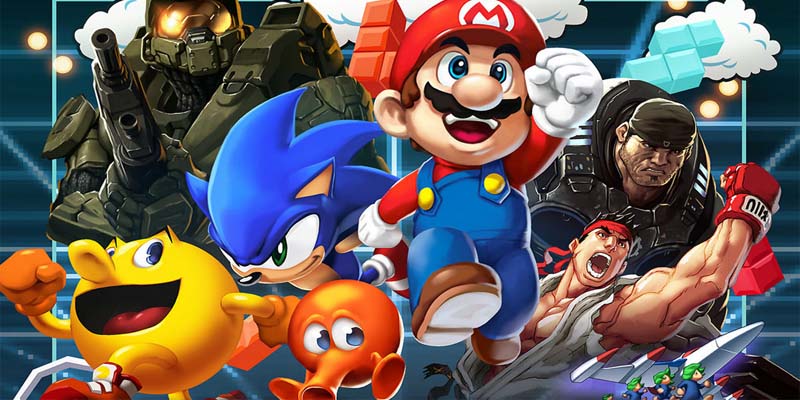 There are dozens of ways you could put together a list of the best video games ever made. You could look to classics, like “Super Mario Bros.” You could look at impact on the medium, or highest sales. You could write down your personal favorites on pieces of paper, then throw them into the air. Where the pieces land? That’s your list! What you’ll find below is the top 10 highest-rated games of all time.

Sekiro isn’t for the faint of heart. In its 30-plus hours, you’ll take on the role of a loyal shinobi who is left for dead in the late 1500s Sengoku-era of Japan. What follows is a lonesome revenge tale in a visually breathtaking world that invites curiosity, exploration, and lore-mongering. But being a FromSoftware game, it severs itself from the “Soulsborne” genre to subject you to a different kind of heartless that emphasizes patience and precision. That invitation is what makes Shadows Die Twice one of the most compelling video games of this past decade. Its white-knuckled combat forgoes stat builds and arms you with a single katana, a grappling hook, and a modular prosthetic arm, forcing you to study the ins and outs of parrying and how all three tools correlate with timing, spacing, and movement. When that finally clicks, Sekiro wastes no time in rewarding you with some dope anime-esque ninja shit. It’s a weird, unforgiving, and downright harrowing game, but it’s an example of how a director and a studio can challenge their own values and principles to compose a complete work of art.

Control is the new weird. It’s a third-person shooter in a world painted in shades of Kubrick, Lynch, and Nolan that digs into the story of a female lead who is searching for answers after being tapped as the new Director of the Federal Bureau of Control and disarming a supernatural threat in The Oldest House — a “shifting place” in New York that’s lined with Elle Decor ideas and alternate dimensions. What follows can only be described as a beautiful mindfuck. Remedy’s intricate smear of sci-fi and mystery is rendered through breathtaking Twin Peaks-esque set pieces and cerebral approaches to lighting and sound design. Then there’s the telekinetic powers, mold people, cursed mirrors, possessed flamingos, and Hideo Kojima doing ASMR about potato chips and the impoliteness of voyeurism. It’s a thread that keeps unraveling as time goes on, but the way it’s all seamlessly intertwined is what makes Control a stimulating crash into the paranormal. It’s a euphoric exploration of top-tier world building, interconnected storytelling, and a crash landing into genre-breaking territory.

1998’s Resident Evil 2 was a cultural phenomenon; 2019’s Resident Evil 2 is Capcom’s attempt at hitting everyone with a noise complaint for yelling about some trenchcoat-wearing bogeyman who views race walking as an American pastime. The remake is still centered around Raccoon City and why it’s pretty much Portland but for zombies, but it ditches tank controls for an over-the-shoulder perspective that would make any RE fan’s head pop. Claire is still a leather-clad badass; Leon still looks like he belongs on the cover of Bop Magazine; and in between all the awkward flirting and cheesy one-liners is a renewed passion for collectibles, sound design, and survival horror that uses perfectly detailed environments to scare you senseless. It’s a candid love letter to Shinji Mikami and the Resident Evil series as a whole, and it’s one that will push you to invest in no health and no item box runs just to see if you can make it out alive.

Death Stranding is a game about connections. It’s part art project that shouldn’t work as it takes the frameworks of Metal Gear Solid IV and V and crams them into Hideo Kojima-sized colloquies about parenthood, isolation, and the pending extinction of humanity. It’s heavy stuff for being essentially a walking sim, but when the social system clicks, it’s transcendent, driven by great acting. Norman Reedus as mail man Sam is tired of people’s shit; Tommie Earl Jenkins is a hero; Léa Seydoux and Margaret Qualley are delightfully strange; and Mads Mikkelsen is… well, unapologetically Mads. Even for a head trip, the surrealness can be a bit of an overkill, but Death Stranding’s ability to augment the simple joy of exploration puts it in a league of its own. It’s high art with pizza delivery missions, and it’s worth obsessing over.

The balls-to-the-wall gunplay in Apex Legends is second to none. It’s an argument that could be diffused with a round of Overwatch, but Respawn’s elevated approach to the battle royale takes the best of Titanfall, CS:GO, PUBG, and Rainbow Six Siege, and fastballs those mechanics into a John Wick-style video game. Skirmishes can erupt into non-stop bullet storms, and its use of 3v3s, ping systems, character powers, verticality, and top-shelf weapon design amplify it to new heights. It’s a rock-em, sock-em shooter, and while it’s still finding its legs, Apex isn’t wasting any time in becoming a contender for top battle royale game on the market. And loot boxes be damned — it’s free to play.

Cadence Of Hyrule is ridiculously good. Mentioning it in the same breath as A Link To The Past and Breath Of The Wild might be premature, but it succeeds by being a pixel-perfect remix of two distant worlds. It’s a Zelda scroller with an undying love to feel every synth, and it all adds up to a classic action RPG and a map full of super-cute Bokoblins, Wolfos, Lynels, and Gibdos. Every sprite, puzzle, slap of the bass, and adorbs nod to Crypt of the Necrodancer reinforces the lovable charms of Hyrule and the fact that this 2D spinoff is a win for video games.

Jedi: Fallen Order is really damn good at the whole Star Wars thing. Following Cal Kestis (Cameron Monaghan), a padawan-turned-fugitive who is tasked with reassembling the Jedi Order and his own fractured past following the execution of Order 66, it’s a post-Sith, pre-Rogue One narrative that echoes the original trilogy through addictive combat. Every subtle detail in the art — from BD-1’s charm to the swells of Stephen Barton and Gordy Haab’s score to the way Stormtroopers react to the lightsaber chaos around them — interweaves into commanding environmental design. With one hell of a final act, Jedi: Fallen Order is a triumph and one of the greatest Star Wars gaming adventures in over a decade

The genius of The Outer Worlds is that it’s a whimsical space saga that doesn’t trip over its newly acquired pair of Moon Boots. It’s an Obsidian marvel stacked with character stats, perks, companions, speech checks, and a totally viable VATS-adjacent targeting system, and then there’s the Forbidden Planet side of it all — from shrink rays to giant space gorillas to mercenary ships called The Unreliable. Its depth is measured and a little more focused on intergalactic capitalism and factions and choices that will question your own politics, but it’s a blast of sci-fi turbulence that uses A+ writing and humor to shatter your expectations.

Arvi “Hempuli” Teikari’s new 2D puzzler follows four simple rules: Baba Is You, Flag Is Win, Wall Is Stop, and Rock Is Push. As the baba an adorable bunny-like creature — the objective is to push aside rocks and touch the flag to complete a level. That is, until you realize every word on the screen is a movable tile and you can modify each of the cardinal rules to complete a puzzle in an entirely different way. It’s a mechanic that can become brutally difficult, but the ability to modify and remix larger X and Y statements is what makes Baba Is You an addictive timesink. It’s a puzzle game within a puzzle game and one that will gut-check your preconceptions about the genre.

If the original Super Mario Maker was a brilliant sandbox for creative souls, then Mario Maker 2 is a mesmerizing love letter to the voices, friendships, and communities its built. It’s the only 2D Mario platformer you’ll ever need (sorry All-Stars), taking the Wii U’s lifeblood of “build it, break it, share it” but with a story mode and 100+ original courses that will give your thumbs a workout. There’s new styles (3D World), new themes (Desert, Snow), and a dizzying kartload of newer parts that include slopes, seesaws, parachutes, on/off switches, and the Angry Sun, and it’s all there to let your pipe dreams run wild. Chompette or not, Mario Maker 2 is an unrivaled masterpiece embracing Nintendo’s weirder chapters to see what you can do with a blank canvas and an everlasting bucket of wide-eyed imagination.