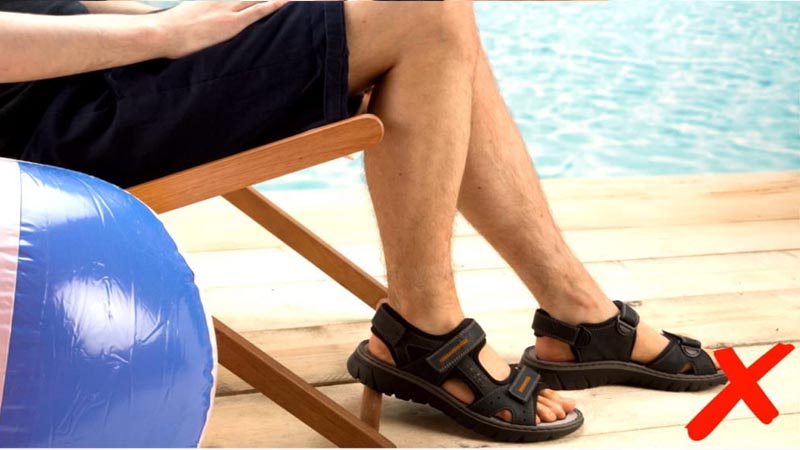 There are a lot of things every guy should have in his closet: the right pair of slim-cut dark jeans, a really good cashmere sweater, a great watch, and a pair of boots that are made to last among them. Not among them? Square toed shoes.

The style, which reached the apex of its popularity in the late ‘90s and early aughts, has somehow clung to relevance in guys’s closets while the other things we wore at the turn of the century (remember the manpri?) have been replaced with clothes that just look better. And yet the square-toed shoe can still be spotted on guys’ feet in even the most stylish places. Including around the New York City headquarters of Men’s Journal, where banker bros abound–and so too do these outmoded, brick like shoes.

By and large, you should wear what you want—it’s a free country after all. But if you actually want to look good, we’d start with excising these things from your closets as soon as you can.

We understand the logic: most guys’ feet are pretty squared off, not rounded, so the square-toed shoe in a standard width allows your toes to not feel constricted. It also makes your foot look like a leather Hot Pocket, so if you’re feeling the pain of a tight fit, do us all a favor and just buy a wider size rounded-toe shoe.

A Suit That Doesn’t Fit

They say there’s not a man alive who doesn’t look good in a suit, and that’s a bald faced lie. You can easily put on a suit that’s too small or, worse, too big, and look a lot worse than you would in a t-shirt and jeans. The trick to avoiding this? See. A. Tailor.

Another shoe we’re largely done with? That weird marriage between a dress shoe upper and a sneaker sole. There are a small handful of genius designers who make them look good in a sculptural way. But the number of guys who can actually pull them off? Infinitesimally small.

The Going Out Shirt

Some wardrobe segmentation is necessary: most of us still can’t get away with wearing our gym gear at the office. But to have a distinct separation between what you wear say, at brunch, and what you wear to get a drink on the weekends is a foolhardy waste of money. It’s too dark in most bars and nightclubs for anyone to notice the colorful stripes and light sheen of the standard going out shirt, so save yourself time, money, and the anguish of making a decision about what to wear to the club and just put on an oxford.

If you’re golfing, great: get your steps, close a deal, live your best life—and go ahead and wear one of those shiny, pima sateen pastel monstrosities we call golf shirts. If you’re not golfing, and you want to express the same kind verve for luxurious leisure that comes across for guys who have legitimate reasons to wear golf shirts? Wear a polo and call it a day.

Feel free to disagree here, but we at Men’s Journal are denim purists who like to buy a pair of raw denim jeans and wear the hell out of them until we’ve earned their distressed look. Purchasing a pre-distressed pair (especially one that’s so shredded apart that it looks like you got into a fight with a school of piranhas) makes a man look like the laziest try hard in the world. And what’s worse? They’re not even trendy anymore.

Australian Starward’s Whiskeys Need a Space on Your Bar

5 Tips for Buying the Right Suit