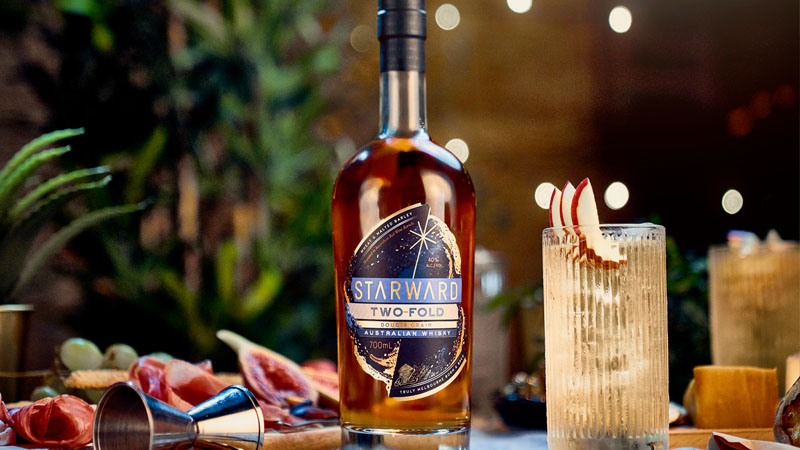 These days, a great whiskey has to do more than sip well. A great whiskey should be an affordable, sippable, mixable jack of all trades. Starward’s Two-Fold Double Grain Whisky is all that and more.

Starward’s whiskeys are universally excellent. The Australian distillery, which was founded in 2007, has won plenty of awards, including accolades from the San Francisco World Spirits Competition. And Starward Nova was one of our favorite new releases of 2019. The relative newcomer Two-Fold is a delicious (if different) member of the family.

Unlike Nova, which is a single malt, Two-Fold is a double grain whisky distilled from a mixture of malted barley (40 percent) and wheat (60 percent) and aged in those Starward-familiar Australian red wine barrels.

That red wine finish, especially as Starward presents it, is magic in the bottle. Whereas the all-malt Nova became lush, rich, and syrupy, the red wine casks merely rounded the edges on Two-Fold’s comparably spicy character, leaving an immaculately balanced, delicious dram that melts on your tongue like brown sugar.

But if you don’t care about tasting notes, care about this: Two Fold is one of those whiskies you can just pour, in any circumstances. Mixed drinks? It’s great. Cocktails? It’s stellar. Sipping it neat? It’s an 80-proof whiskey that drinks with the body of something substantially more powerful.

The honest truth is that, like most of the great whiskeys of the world, Two Fold is incredibly versatile. The light, dry, spicy mouthfeel and floral character make it ideal for several easy-to-make-at-home cocktails, including the old fashioned, the boulevardier, and the highball. With a boulevardier, it’s rich and buttery; with a highball, it’s spicy and aromatic; and with an old fashioned, it’s mellow and easy-drinking.

One drink we’ve been thoroughly enjoying is, surprisingly, the Two Fold and Tonic. Treating Two Fold like gin is a winning strategy, though we’ve yet to try it in the likes of a Ramos Fizz.

Australian whiskeys aren’t a major category yet with regard to volume, but they’ve been wowing collectors and competitions for years. For a high five–worthy $33, Starward Two-Fold is easily the most versatile thing you can put on your bar this week, and at least until everyone else figures that out, it should be fairly easy for you to track down.

6 Things No Man Should Ever Wear