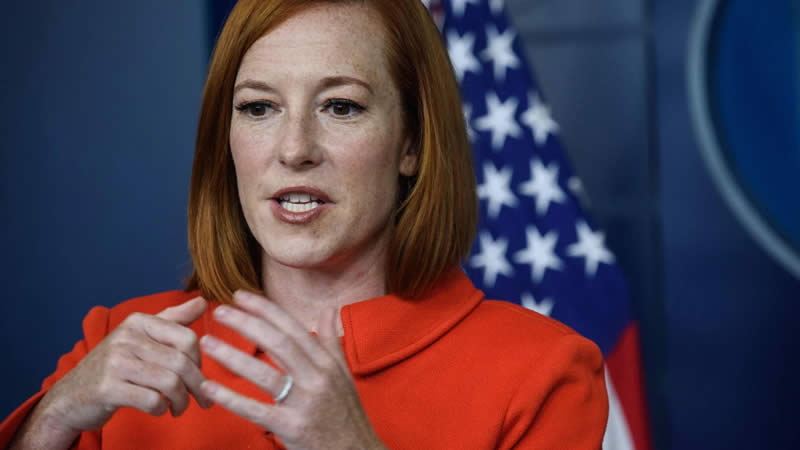 White House Press Secretary Jen Psaki made the surreal argument that Florida’s Governor Ron DeSantis is “putting politics ahead of public health” by protecting the citizens’ fundamental freedom of choice on Covid-19 vaccines.

In the course of her diatribe, however, Psaki admitted something that has been bubbling on the backburners of the media for some time: Biden’s federal vaccine mandate currently doesn’t even exist.

“His requirements are promulgated by a federal law,” Psaki claimed. “So, when the President announced his vaccine mandates for businesses, that, of course, we’re waiting on OSHA regulations as far as the next step.”

As earlier reported on Becker News, Biden’s federal vaccine mandate was announced over a month ago. The OSHA directive would be the enforcement mechanism for the executive order, however, it has not been issued. Legal analysts expect that such a directive would likely be struck down in court, as 24 state attorney general’s explained it in detail in a letter to the Biden administration.

“That was pursuant to federal law and the implementation of federal law because it’s an executive order,” Psaki continued. “So, our intention is to implement and continue to work to implement these requirements across the country, including in the states where there are attempts to oppose them.”

The most recent example of state opposition has been Texas, where Governor Greg Abbott on Monday issued an executive order forbidding the enforcement of any vaccine mandates in the state. Montana is the only other state that currently has as sweeping a mandate as Texas.

“I will say, since you gave me the opportunity, Governor Abbott’s executive order banning mandates, and I would also note the announcement by Governor DeSantis this morning essentially banning the implementation of mandates, fit a familiar pattern that we’ve seen of putting politics ahead of public health,” the well dressed Psaki claimed.

“Over 700,000 American lives have been lost due to Covid-19, including more than 56,000 in Florida and over 68,000 in Texas. And every leader should be focused on supporting efforts to save lives and end the pandemic.”

On Tuesday, Southwest’s CEO announced that “we are not going to fire any employees” over the company’s vaccine mandate, and pointed to the Biden policy as the reason for the mandate’s issuance. However, the Southwest Pilots Association on Friday filed a lawsuit against Southwest ahead of a weekend of massive operational disruption; the lawsuit was filed in U.S. District Court in Dallas, Texas.

In a court battle that has been described as a ‘test case’ for the Biden federal vaccine mandate, a federal judge has halted the enforcement of New York’s vaccine mandate on equal protection and First Amendment grounds. Thus, employers who are complying with the currently non-existent mandate are doing the Biden regime’s ‘dirty work.’ Despite an expected legal defeat for the Biden administration, they are carrying out mass firings of employees ahead of the holidays.

If the state court cases and the brewing federal court battles are any indications, it makes sense why the Biden administration would wait over a month to actually issue its federal vaccine mandate: The White House fully expects to lose in court.