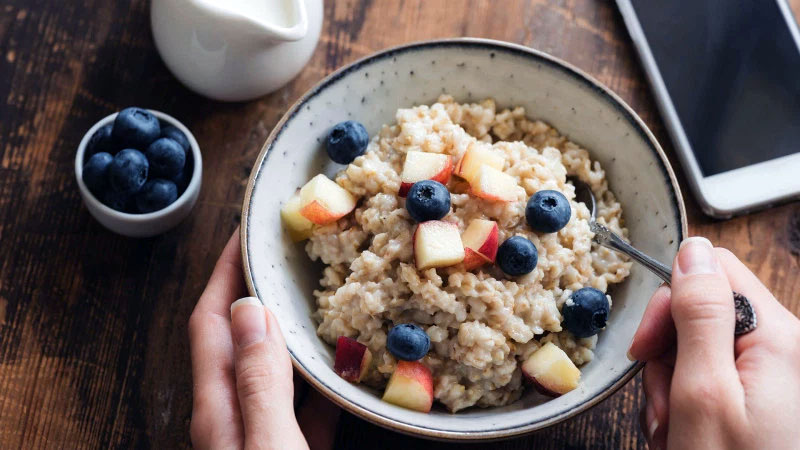 If you’re looking to lose weight, new research shows that timing is everything. That’s because harnessing the power of your circadian rhythmOpens a New Window., the 24-hour cycle that controls bodily processes like metabolism, hunger, and drowsiness, can have a big effect on weight loss. A new study published in the journal Obesityinvestigated how people responded to eating meals earlier in the day. The researchers found that eating during a specific time window (and fasting outside of that time) can help suppress your appetite, burn fat, and ultimately take inches off your waistline.

The study followed 11 participants over four days. A control group followed a normal eating schedule, with breakfast, lunch, and dinner spread out through the morning, afternoon, and evening. The other group followed an early time-restricted feeding (eTRF) diet, which restricts meals to a six-hour window between 8 a.m. and 2 p.m. Breakfasts lined up between the two groups, but eTRF dieters were eating dinner far earlier—in the mid-afternoon, at the same time their control group counterparts were lunching. The diets were isocaloric, meaning that all the participants consumed the same number of calories. Each group still ate three meals a day and slept for the same length of time.

Although it seems counterintuitive, by packing their eating into a shorter window and fasting at other times, the eTRF participants had fewer sensations of hunger than the control group. The restricted eating window led to decreased food cravings during the day, and led to overall increased feelings of fullness while awake. In addition, eTRF dieters expended more energy during the day than the control group.

Based on this data, the researchers set out to answer a key question: Whether the weight loss spurred by the eTRF diet stemmed from increased energy expenditure or from a decreased appetite. Ultimately, they determined that “meal‐timing interventions facilitate weight loss primarily by suppressing appetite.” They also concluded that eTRF could give a weight loss boost by helping the body burn more fat, although they caution that more research is needed to assess that connection. Overall, though, they argue that aligning meals with the body’s circadian rhythm can be “a powerful strategy for reducing appetite and losing weight.”

Other research points to the benefits of eating in accordance with your circadian rhythm as well. Previous studies, including a 2013 study from JapanOpens a New Window., show that nighttime snacking interferes with the body’s natural metabolic cycle, changing fat metabolism and increasing the risk of obesity Opens a New Window..

In addition, this study is a sequel of sorts to a 2018 study from the same researchers Opens a New Window.. The earlier study found that the eTRF diet lowers blood pressure and appetite. That’s probably because it involves not eating for 18 hoursOpens a New Window.: “eTRF is tantamount to eating dinner in the midafternoon and fasting for the rest of the day,” the study says. Bottom line: The balance of eating and fasting—and matching your body’s natural rhythm—can be an effective way to maximize weight loss. It’s not just about whatyou eat, but also when.

Why Does My Muscle Twitch

How to Take Care of Your Eyes

7 Signs Your Semen Is Healthy and Strong