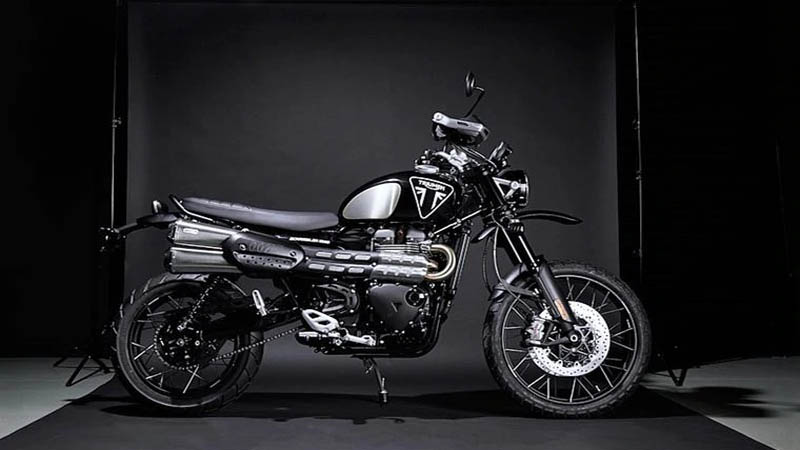 Alongside four Aston Martins, an awesome array of Triumph motorcycles will be featured in No Time to Die’s frenetic chase scenes. But for those who want a rideable tribute to James Bond’s 25th movie, the heritage British bike brand is making just 250 Scrambler 1200 “Bond Edition” models.

Based on the range-topping Triumph Scrambler 1200 XE, the new limited-edition bike is loaded with nods to the long-running spy franchise. Exclusive design elements include an exhaust number board, lower-side panel finisher with 007 brandings, and a premium leather seat embroidered with the words “Bond Edition.

The coolest visual touch might be the TFT instrument startup screen, which displays the iconic “gun barrel” motif featured in every Bond installment’s title sequence. The murdered-out paint job is also derived the Triumph that Daniel Craig will pilot in the film, with the anodized rear, mudguard, powder-coated swingarm, sprocket cover, anodized grab rail, sump guard and fork guard all finished in black.

Gold accents, additional engine badges, fog lights with black anodized shrouds, a stainless steel headlight grill, and an arrow silencer exhaust with carbon-fibre end caps round out the visual upgrades. At the core of the Bond Edition is Triumph’s 1200cc 270° 8-valve Bonneville engine, which delivers 89 horsepower and 81 pound-feet of torque smoothly to tubeless tires via a six-speed gearbox.

The Triumph 1200 Scrambler Bond Edition is priced at $18,500, but unfortunately, all 250 models have already been sold.

NIKE ‘SPACE HIPPIE’ SUSTAINABLE SNEAKERS ARE MADE FROM RECYCLED MATERIALS

Italian Police adds a Swanky Lamborghini Huracán to its Fleet