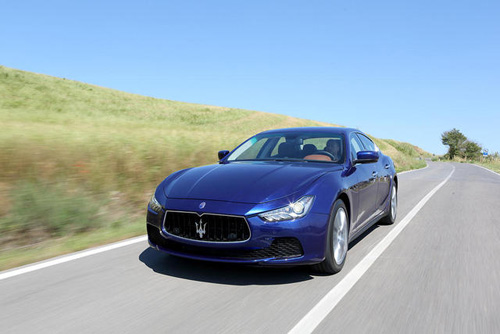 Maserati is now under the ownership of Fiat, and if you’re expecting a healthy dose of parts-bin engineering, you’ll be proven right — but the bits that count are all Maserati. The Ghibli is based on a shortened version of the Quattroporte platform. The 3.0-liter direct-injected twin-turbo V6 is a Maserati design, built by former owner (and now corporate partner) Ferrari, with an eight-speed automatic from ZF. And the sounds that come out of this thing have to be heard to be believed: One earful of the Ghibli at full tilt, and you’ll understand why the world worships Italian cars. 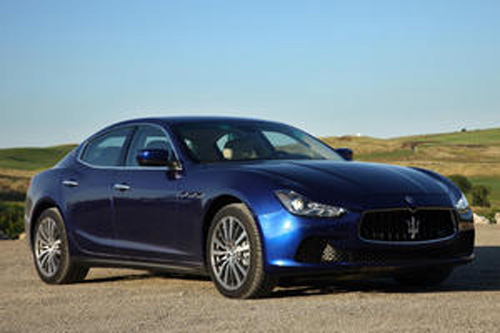 Our test car was the top-of-the-line S Q4, priced at $76,950. The S indicates a power bump to 404 horsepower and 404 lb-ft of torque, as opposed to the base car’s 345 hp and 369 lb-ft, and the “Q4” designates all-wheel-drive. Maserati Ghibli claims a 0-60 time of 4.7 seconds. As for top speed, how does 165 MPH grab you? And that’s for the 345 hp version — Maserati says the S Q4 will hit 175. With the bigger Quattroporte priced at about $105,000 to start and the GranTurismo coupe starting at nearly a buck thirty, one wonders how Maserati can bring the Ghibli in under $70,000. The answer will be abundantly clear once you climb inside, especially if you’ve driven a late-model Chrysler product: The Ghibli borrows from the Chrysler parts bin. We recognized the headlight and dimmer switches as well as the big touch-screen infotainment system, which is basically Chrysler’s UConnect with a different color scheme. 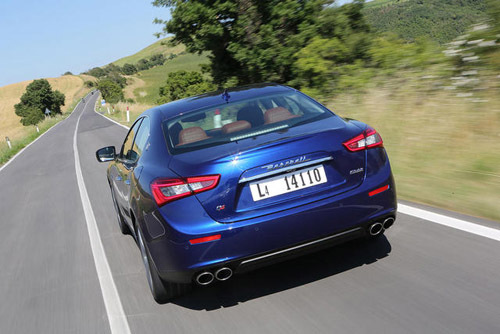 In years past we would have considered this a tragedy, but all the effort (and money) Chrysler has put into their switchgear has paid off: Set into the Ghibli’s rich leather-wrapped dash, the bits and pieces look and feel right at home. Ergonomically, the design is sound except for a turn-signal stalk placed awkwardly behind one of the shifter paddles. Hey, it wouldn’t be Italian if it wasn’t flawed in some way. What’s missing is the hand-built feel of older Maserati Ghibli and that’s OK with us. We’re fine with a Maserati that feels as if it was built in a factory rather than someone’s garage. Tooling around town in the Ghibli, we can buy into its role as a Mercedes E-Class competitor. 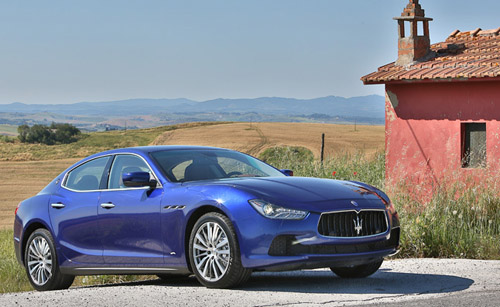 Though its back seat is nowhere near as generous as the Mercedes it competes with, the Ghibli delivers a smooth, composed and quiet drive, its engine humming serenely and its transmission shifting smoothly. The ride is not as smooth as that of an E-Class, and the Ghibli is a bit more averse to legal speeds; it’ll quietly creep up to 85 MPH with little drama or warning. But aside from a few extra jolts and jitters, it does a credible imitation of a German luxo-yacht. That all changes when you press the Sport button. Shifts become crisper, the throttle response is sharper and most importantly, the exhaust starts to sing with a distinctly Italian wail. The Ghibli begins to transform itself from a wannabe Mercedes to a Maserati Ghibli. 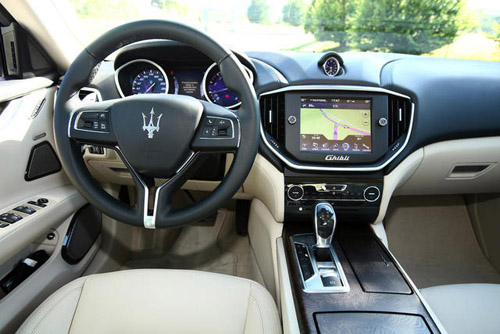 Appreciating the change requires a curvy road, preferably one with long, fast sweepers and canyon walls off which the Ghibli’s exhaust can resonate. We set the transmission to manual mode and shifted with the chunky metal paddles on the column. Not that we needed more power; the S engine has a torque plateau between 1,750 and 5,000 RPM, and will jet ahead in any gear. We just wanted to hear the exhaust — the wailing aria at 6,000 RPM and the POOM! as we grabbed the next gear. The Ghibli’s biturbo V6 will happily spend all day at or near redline, and if we owned this car, we’d be happy to drive it that way. While the Mercedes E-Class takes the corners with a sense of duty and an undertone of distaste, the Ghibli is right at home. The Q4’s all-wheel-drive system biases power to the rear, disconnecting all power from the front wheels when possible. Even so, pushing hard into sharper turns elicits a bit of understeer before the driveline shifts the power around and the electronics make a correction.

The Ghibli’s stability control system will allow a touch of oversteer with the right inputs, but we had a lot more fun on broad, fast turns, where the Ghibli could show off its prodigious levels of grip. The steering is deceptively light, yet sharp and precise; you don’t so much steer the Ghibli through the turns as caress it. After a couple of hours of thrashing about in the Ghibli, we began to understand why Italians are superior lovers. It’s both aggressive and delicate, and driving it is an experience that transcends the simple act of getting from Point A to Point B. You drive a BMW; you finesse a Maserati. –Autoguide

The Hobbit: The Desolation Of Smaug

Mercedes Benz Presents Watch That Connects With Your Car