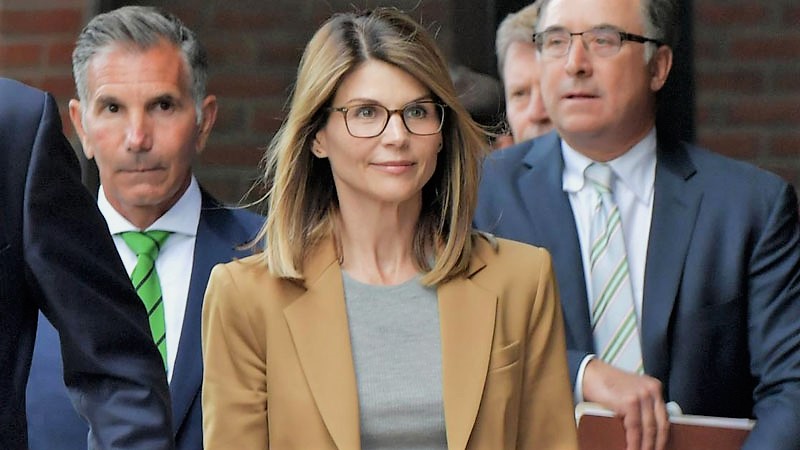 As seen in photos obtained by Page Six, Loughlin, 56, partnered with Project Angel Food to hand out bagged meals.

The organization “prepares and delivers healthy meals to feed people impacted by serious illness, bringing comfort and hope every day,” according to its website.

For the outing, the actress sported jeans, a blue and red “California” sweater and baby blue tennis shoes, which she accessorized with a necklace and a Project Angel Food baseball cap.

“Lori Loughlin completed her community service in early February. We are grateful that she’s a compassionate person who continues to volunteer with Project Angel Food,” the organization’s head of communications, Brad Bessey, tells PEOPLE.

On Dec. 28, a legal source confirmed to PEOPLE that the Full House actress was released from a federal correctional facility in Dublin, California, after serving nearly two months for her role in the high profile college admissions scandal.

The couple were caught up in the scandal in which more than 50 parents allegedly bribed their children’s way into prestigious universities.

According to the criminal complaint against them, the couple was accused of paying $500,000 to Rick Singer and Key Worldwide Foundation to falsely designate their daughters, Olivia Jade Giannulli, 21, and Isabella Rose Giannulli, 22, as recruits to the University of Southern California crew team, even though neither ever participated in the sport.

Loughlin reported to FCI-Dublin in Northern California on Oct. 30 to serve her sentence. On Nov. 19, Giannulli was booked into federal prison in Lompoc, near Santa Barbara, where he is currently serving his sentence.

Following her release, a source told PEOPLE that Loughlin was “very relieved and happy to be home,” adding that “she has felt stressed about Mossimo, but got an update that he is doing okay.”

“[Giannulli] has also been isolated because of COVID,” the insider added. “This whole nightmare won’t stop completely until Mossimo is released too. But Lori still seems positive.”

Cuomo Accuser Recalls Alleged Harassment: “The governor’s trying to sleep with me”