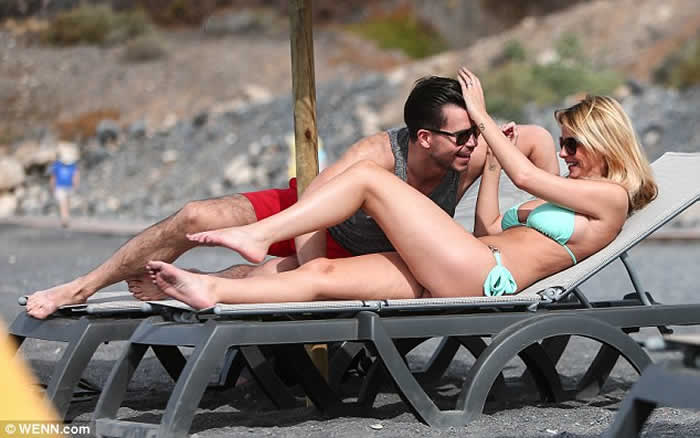 She made a career by flaunting her famous assets on the iconic Page 3. And model Rhian Sugden certainly proved she’s still got curves that can turn heads as she hit the beach during a romantic break with actor fiancé Oliver Mellor. The stunning blonde, 29, raised temperatures as she lapped up the sun in Tenerfie during a recent getaway.

Slipping her generous cleavage into a skimp turquoise bikini, Rhian enjoyed a stroll along the island’s famous volcanic sands. The two-piece made the most of her tiny figure, with her toned stomach and shapely legs boasting a golden tan. 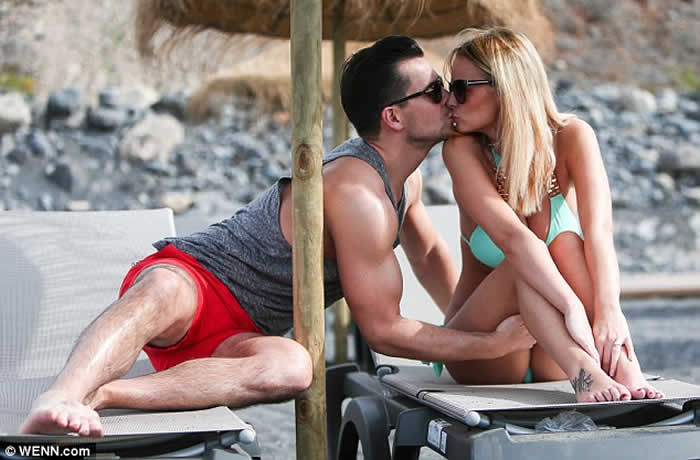 After a gentle stroll in the surf, the ex-Celebrity Big Brother contestant returned to her sun lounger, where she was joined by handsome Oliver.

The former Coronation Street hunk – who played Dr. Matt Carter on the soap – couldn’t keep his hands off his bride to be as she laid back to top up her tan. 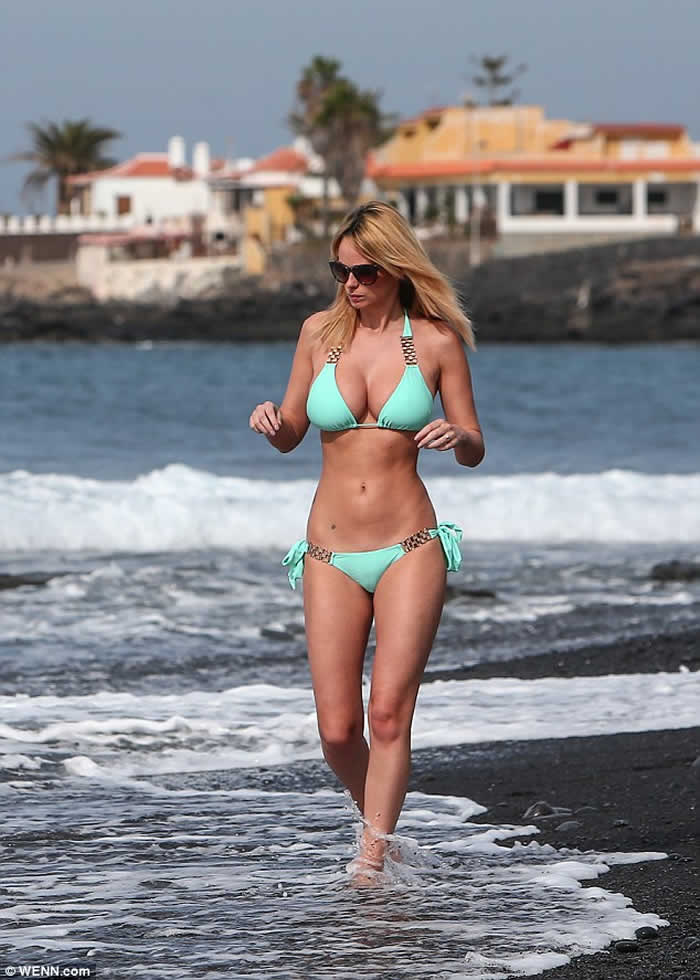 The handsome star, wearing a grey vest and red shorts, leaned in for a kiss from the pretty blonde as they made the most of their time together.

The getaway comes after Oliver reportedly gave Aussie cricketer Shane Warne a piece of his mind for sending Rhian a string of messages. 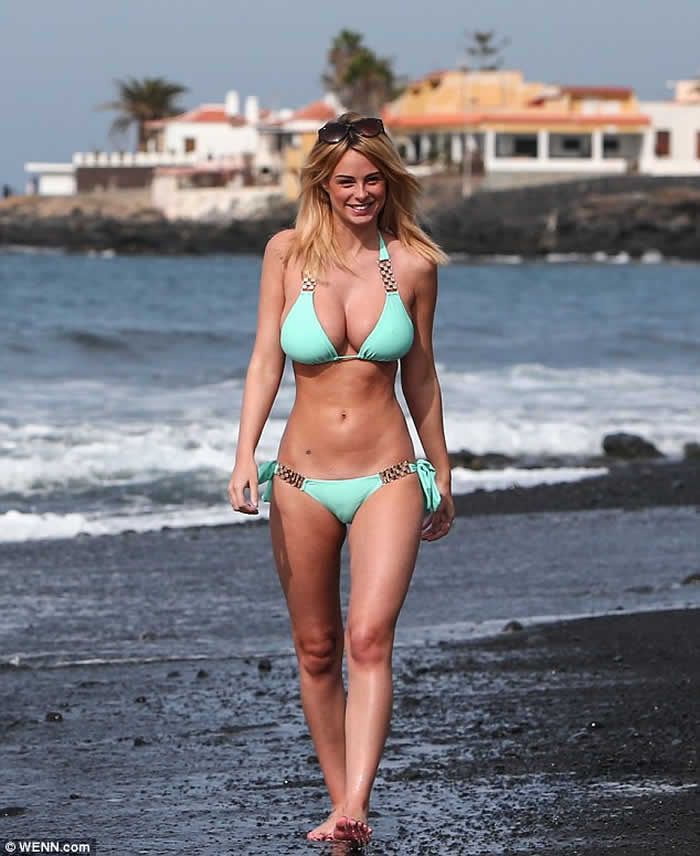 The Sun claimed the 46-year-old sportsman received a stern warning from the actor, 34, after he ‘pestered’ the glamour model requesting a meet up.

In the alleged exchange, which is said to have taken place last week, Oliver reportedly labelled Warne ‘inappropriate’ and told him to ‘get the hint’. 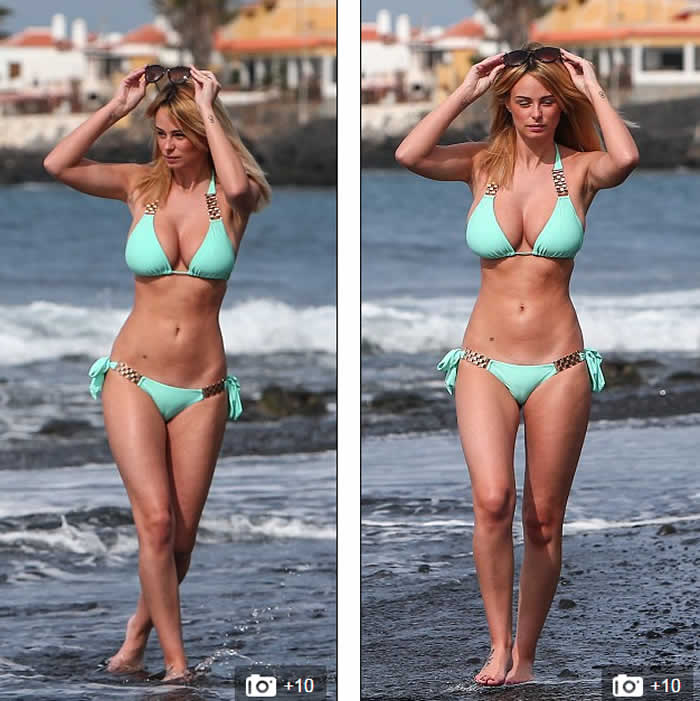 Oliver is said to have taken things into his own hands after Shane, who first contacted Rhian via Twitter, continued to message his better half despite her telling him she was engaged.

According to the publication, Oliver told Warne: 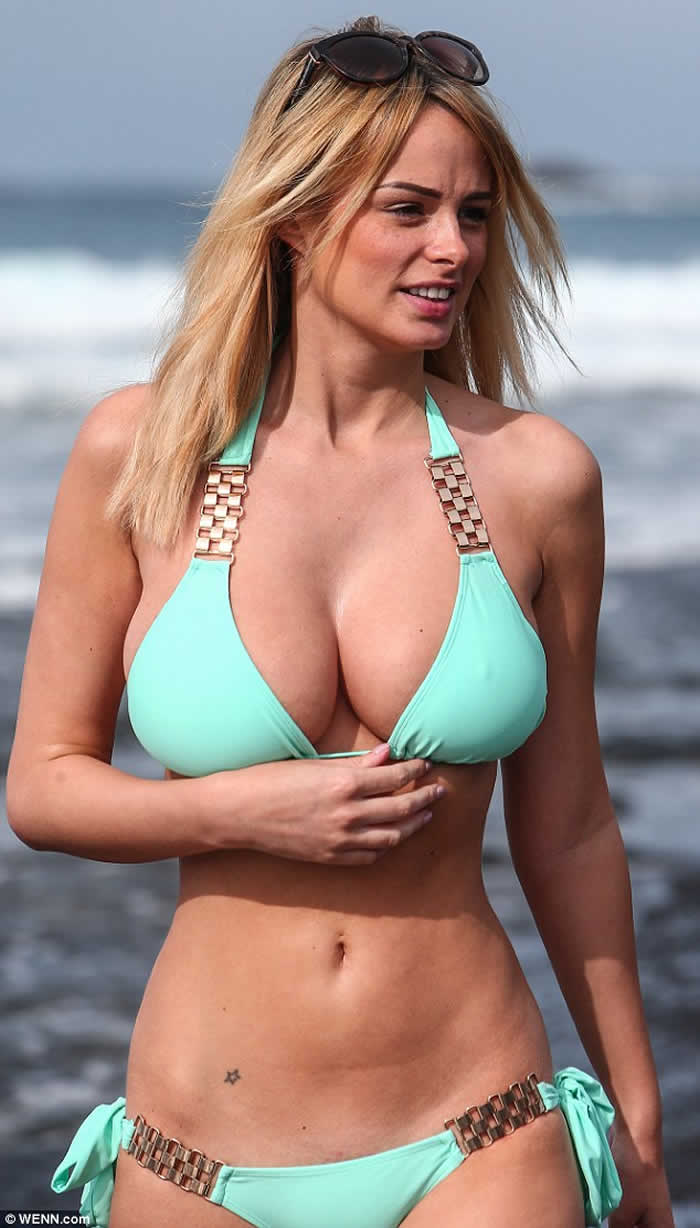 ‘Not sure why a 46 year old man who she has never met… would want to meet up with her, other than to be inappropriate. ‘Get the hint and find somebody single to bombard with messages.’ Oliver proposed to the beauty in 2014 during a flashmob outside Manchester Opera House.

‘The Revenant’ and Leonardo DiCaprio are Winners at BAFTA Awards

Amy Willerton sunbathes in her Underwear Rather than Bikini

Ryan Seacrest and Shayna Taylor on the French Riviera