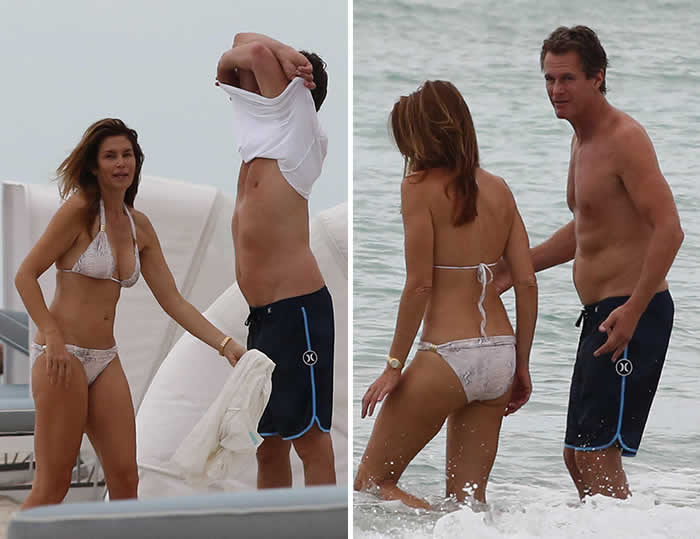 Cindy Crawford is giving us all something to aspire to! The 49-year-old supermodel looked flawless at the beach on Monday with her husband of 17 years, Rande Gerber. “Who needs hair and makeup when you look like this after jumping in the ocean,” Gerber, 53, gushed over his wife on Instagram.

The couple took to the waves in Miami, Florida, where Crawford is promoting her new book, Becoming. The book, available now, chronicles her life and career via stories paired with some of her most memorable images.

Crawford went makeup-free while hitting the sands in a snakeskin-print two-piece swimsuit and beachy waves that would put Bo Derek to shame. Crawford and Gerber jetted to Miami after sharing a weekend in London with pals George and Amal Clooney, as well as Matt Damon with his wife, Luciana Barroso.

The group was celebrating the launch there of Gerber and Clooney’s Casamigos Tequila brand, in addition to the release of Becoming.  ET caught up with Crawford last month at a book signing in New York, where she revealed her favorite body part.

“I would say definitely, as a model, your legs,” she said. As for her milestone 50th birthday coming up in February, Crawford said it isn’t as big a deal as some people make it out to be.  When I started modeling, I thought of it as a five-year career,” she said. “And I kept on tacking on five more years.” “As a woman I don’t go, ‘Hey, whoopie!'” she continued. “But I’m grateful for my life. It’s just a number, right?”

Who needs hair and make-up when you look like this after jumping in the ocean. The #becomingcindy tour continues in Miami @casamigos

5 Seconds of Summer and Little Mix for Teen Awards