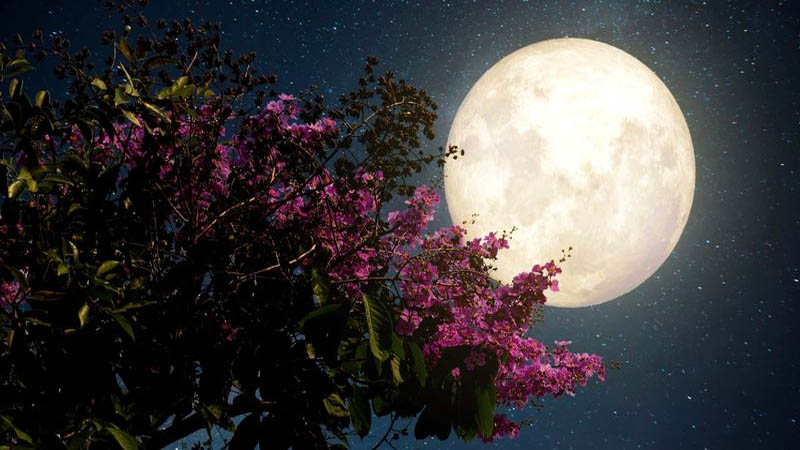 Even if you’re stuck indoors during the pandemic, you can still catch May’s full moon, the last supermoon of 2020, which will appear full from Tuesday evening through Friday morning (May 5-8).

Technically, the full moon, which will be in the constellation Libra, will last only a moment. That will happen at 6:45 a.m. EDT (1145 GMT) on Thursday, May 7, when the side of the moon that faces Earth is fully illuminated by the sun, according to NASA. Skywatchers may also notice the “evening star” planet Venus, which was shining at its brightest of the year just last week, according to Space.com, a Live Science sister site.

May’s full moon is also known as the flower moon, a fitting moniker given that wildflowers and gardens are blooming all over the Northern Hemisphere. Other names for May’s full moon include the corn planting moon, milk moon and Vesak festival moon, which commemorates the birth, enlightenment and death of the Buddha, according to Encyclopedia Britannica.

The flower moon is the last of four supermoons to light up the night sky in 2020. The word “supermoon” isn’t a true astronomical term, however; it was coined by the astrologer Richard Nolle in 1979. Nolle said a full moon is “super” if it happens within 90% of perigee (when the moon is closest to Earth), NASA reported. Most years have three or four supermoons in a row. This year, the four full moons from February through May were the “super” variety, according to NASA.

This week’s supermoon will be a treat for skywatchers, even if you’re watching through a window from a darkened room (light pollution detracts from the night sky). Supermoons appear between 7% and 15% brighter than a typical full moon. Usually, full moons measure about 31 arc minutes (0.52 degrees wide), and on May 7 the moon will be 33 arc minutes (0.55 degrees) across, reported Space.com. For reference, a clenched fist held an arm’s length away is about 10 degrees wide.

f you use binoculars or a telescope to see the supermoon in more detail, be aware that you may need a filter to protect your eyes, Space.com reported. You won’t need a filter if you look with just your eyes, although the moon’s craters may be harder to observe.

The opposite of a supermoon is the aptly named micro moon. This happens when the moon is at apogee, or it’s the farthest distance from Earth. In 2020, two micro moons will happen in October — on Oct. 1 and Oct. 31 — meaning that the second micromoon will also be a blue moon — a second full moon during a single calendar month — according to timeanddate.com.

Hugh Hefner and Crystal Harris Have A Dogfight