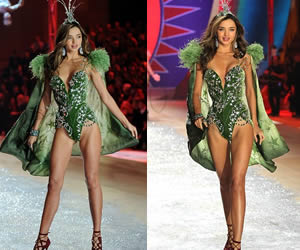 Miranda Kerr husband is about to appear on the big screen once again as Legolas, the beautiful elf from the Lord of the Rings trilogy, but it seems that Miranda Kerr got to Middle Earth before him. Or fell there, perhaps.

The incandescent 29-year-old chose a magical forest green creation that wouldn’t look out of place in a Peter Jackson film as one of her outfits for the annual Victoria’s Secret Fashion Show in New York on Wednesday night. Her chap, Orlando Bloom, 35, is one of the stars of The Hobbit: An Unexpected Journey, which takes us back to The Shire and the time just before the adventures of The Lord of the Rings began. Bloom’s character is not in the Tolkien prequel but was asked back by Jackson; quite a coup for him and his family who have enjoyed being in New Zealand for filming when Australian Kerr’s work allows.

The fantastical world of Tolkien recreated by Jackson certainly seems to have influenced Kerr in some of her choices for the big show. She was every bit the fairy princess in the green number, Kerr even had a cape added to the basque for good measure. The forest green of the outfit was elvish and the stars climbed up the bodice on branches like an enchanted trellis until they shot off Miranda’s cleavage. Feathered wings resembled grass as they curled towards Miranda’s bouncy chestnut mane, which was crowned with a queen fit for a princess of The Shire. The plunging neckline ensured the creation was as sexy as it was fanciful.

For another of her appearances, Kerr wore an enormous pair of swan feathers… and looked equally suited to an appearance in a fantasy film. Another saw her in tamer, candy-coloured lace… but it was still a stunning look. Doutzen Kroes, 27, also wore some spectacular outfits during the show which had several segments including Angels in Bloom, Calendar Girls, Circus, Silver Screen Angels and Dangerous Liaisons. Perhaps her stand-out was a fun confection of pastel pink pom poms that she accessorised with a black hula hoop that she lasciviously moved up and down over her body.

She also slipped into a sexy black and pale blue cage and feathers number that seemed to entrance Rihanna during her performance.

The Dutch beauty also almost stole the show in white feathers, that were arranged from a bejeweled crown like an explosion from a firecracker.  The majestic headpiece couldn’t distract from the clear stones scattered across her toned torso.