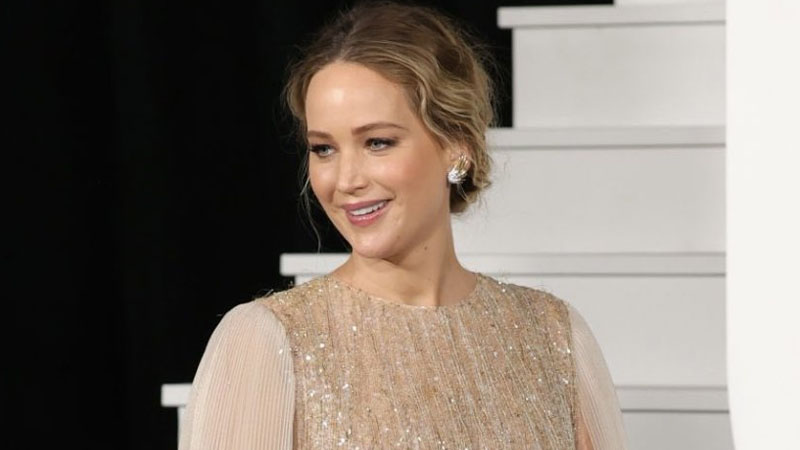 At the premiere of their new film, “Don’t Look Up,” Jennifer Lawrence flaunted her baby belly and posed with her co-star Leonardo DiCaprio. On Sunday, the event took place in New York City.

A Twitter user posted photographs of Lawrence and DiCaprio smiling on the red carpet together. The 31-year-old actress was dressed in a golden gown with long sleeves in the photographs.

Lawrence, who is expecting her first child with husband Cooke Maroney, finished her ensemble with stunning earrings. For the event, DiCaprio, on the other hand, donned a basic black suit.

Another user posted a solo photo of the actress, who proudly displayed her baby belly to the camera.

One of the users provided a photo of DiCaprio and Lawrence on stage with Jonah Hill and Meryl Streep, who played their co-stars in the film.

Lawrence also joked with an Access Hollywood reporter about releasing an album with singer Ariana Grande this Christmas.

Lawrence and DiCaprio developed “instant camaraderie” while filming the movie together, according to DiCaprio.

The film is a dark comedy about two low-level scientists who discover that a comet is heading towards the planet Earth. They attempt to warn others about it, but no one believes them.

“Don’t Look Up” will be released in cinemas on December 10 in the United States, but it will be available to stream on Netflix from December 24 onwards.

In addition to “Don’t Look Up,” Lawrence will next be seen in Lila Neugebauer’s film “Red, White, and Water.” Brian Tyree Henry, Stephen McKinley Henderson, Jayne Houdyshell, and Russell Harvard will also appear in the film.

She’ll also appear in films such as “Mob Girl” and “Bad Blood.”

DiCaprio, on the other hand, will next be seen in Martin Scorsese’s film “Killers of the Flower Moon.” Brendan Fraser, Lily Gladstone, Jesse Plemons, Robert De Niro, and Sturgill Simpson star in the film, which is currently in post-production.

The mother and her partner are accused of murdering autistic 8-year-old daughter, dumping her body in a wooded area, and reporting her missing

Is Kanye West trying to win Kim Kardashian with the Julia Fox photoshoot?