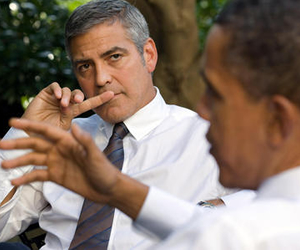 Sources are saying that George Clooney is going to host a fundraiser for President Barak Obama for his re-election campaign. George Clooney also says that there is one thing he is not willing to do.

George Clooney recently said that he is going to do whatever he can to support President Barak Obama and his re-election campaign only if he doesn’t have to sing. George said this in regard to President’s singing performances that he performed recently.

George Clooney is going to host a fundraiser along with 150 other supporters at his house in Los Angeles California. The tickets are worth $4000 each and they are all going to be sold out soon by the Oscar winner George Clooney. All the money that is going to be collected by the tickets is going to go to Obama’s Victory Fund. This is a joint fundraising committee of the president for America, the Democratic National Committee and also several state democratic parties.

This is going to be a lot of fun for those who are getting the tickets.

Breaking Up With Her