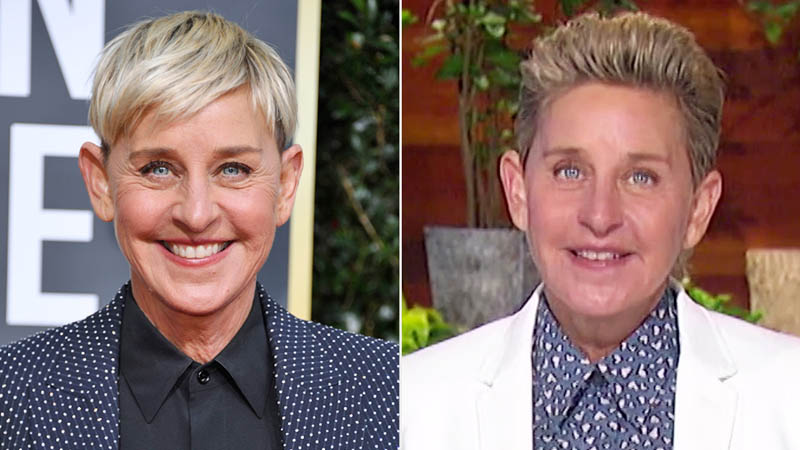 he talk show host, 62, switched up her signature pixie haircut for a slicked back style, which she debuted on The Ellen DeGeneres Show this week.

Her fans and followers reacted to DeGeneres’ drastic new look on Instagram, with a few people pointing out that the sleek style is similar to the one her wife, Portia de Rossi, rocked several years ago.

The TV host’s new hair look isn’t the first time she debuted a switch-up on the show. In 2019, the star filmed an episode with noticeably blonder, shorter hair after a disastrous coloring situation.

“When you have short hair, you have to color it often, cause my hair grows really fast. So I’m constantly coloring it, so it always looks different when you watch the show — sometimes it’s a different tone,” she began the segment, showing off her new color.

She explained she wanted to speed up the usual process of using foils to highlight her hair and instead, dye her whole head. But she quickly learned the bleach-and-tone technique still takes hours to complete.

After DeGeneres didn’t like the final look, her colorist gave it another try. But in the end, not only did her hair color contain so many shades she joked it looked like “the pride flag,” it was also damaged from so much processing.

She then hired another team of colorists for an at-home appointment to fix the brassy color. “My hair couldn’t take anymore. Literally, I can’t touch it. I can’t wash it. I should be fine if I don’t blink or sneeze.”

Luckily, DeGeneres’ hair survived the coloring fiasco and looks fuller than ever with her new teased ‘do.

Her most recent hair transformation comes just weeks after she addressed allegations of workplace toxicity in a six-minute opening monologue in the season 18 premiere of her talk show.

“As you may have heard, this summer there were accusations of a toxic work environment at our show, and then there was an investigation,” the television personality began. “I learned that things happened here that never should have happened. I take that very seriously, and I want to say I am so sorry to the people who were affected.”

“Being known as the ‘Be Kind Lady’ is a tricky position to be in,” she said. “… The truth is I am that person you see on TV. I am also a lot of other things. Sometimes I get sad. I get mad. I get anxious. I get frustrated. I get impatient — and I am working on all of that.”

“I am a work in progress,” she concluded.

DeGeneres was supported by de Rossi on the day the season premiere was filmed, and the crew applauded when the comedian walked off the set, a source previously told PEOPLE. “It was an emotional moment for everyone; she thanked everyone,” the source added.

The premiere came after WarnerMedia conducted an internal investigation into The Ellen DeGeneres Show following numerous complaints of workplace toxicity.

DeGeneres has since apologized to her staff, and three top producers — Ed Glavin, Kevin Leman and Jonathan Norman — have parted ways with the show. Staffers on the show also recently learned that they will now receive increased benefits.

Selena Gomez: ‘Justin Bieber Is the One’

Paris Hilton: I had to get out of Celeb Circus