This Hollywood movie is directed by Antoine Fuqua, Aaron Eckhart plays the president, and Ashley Judd is his loving wife. During their adventurous tour one night in heavy snow, away from Camp David, the president’s stretch limo blows a tyre and teeters terrifyingly over a bridge with only the VIPs in the back keeping it from toppling over. Nothing seems to be working in this terrifying scenario but out of the blue, young Michael Caine show up and reveals his great idea of escaping this mess they have found themselves in. Gerard Butler who is playing a role of president’s secret service bodyguard and best buddy named as Mike Banning in the movie end up making a split second decision which saves the lives of all in the vehicle. This movie is yet another one of those kind where director is keen to depict the amount of danger American officials at white house and civilians are surrounded in. The only difference in this movie from rest is that the bad-guy this time is not a Muslim but North Korea is depicted has bad state which is after peaceful, loving and caring America. The word “Olympus” in the movie represent  the secret service code for the White House, and unfortunately it has fallen into the hands of North Korean terrorists, who are determined to blackmail Benjamin Asher to withdraw all American forces from South Korea and hand over the operational keys to the nation’s nuclear missiles. North Korean terrorist kidnaps many VIPS including Asher in the White House basement, his young son is sought by the terrorists, the leader of the House has been sworn in as acting president, and much of central Washington is in ruins and strewn with bodies. 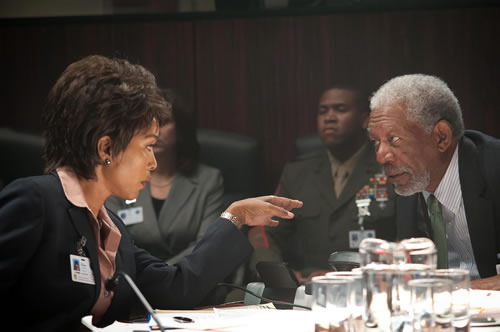 After the terrifying incident on that snowy night Mike Banning the protector of president find it hard to get over it but as usually, like other movies he somehow finds the way to motivate himself to protect the president in whatever scenario present itself. His chance comes when North Koreans bust in to white house and make hostage of president along with many VIPS. Director of movie tried to exploit the real tension between North Koreans and America but sadly, movie failed to give realism or satirical edge, or prophetic authority of any kind. In the meanwhile when president is tied up in white house by North Koreans, Morgan Freeman who is the speaker of the house takes the responsibility of being an acting president.Acting president feel the necessity of speaking to nation while speaking to nation, he assures American for everything will be ok in an emergency TV broadcast. 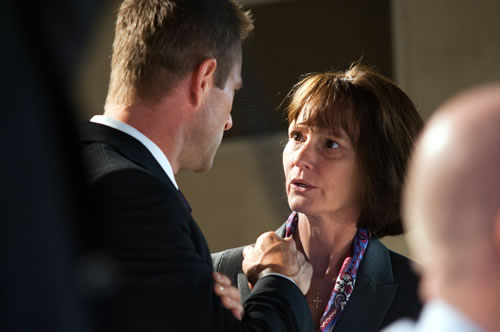 Robert Forster plays a role of grizzled, frowning general who strides in and demands of his aghast subordinates. The terrorists from North Korean may not have any links with Pyongyang but their demands are very clear and loud. They want quick pull out of American troops the demilitarized zone in the Korean peninsula and in failing to fulfill their demands they are not afraid of killing the president.