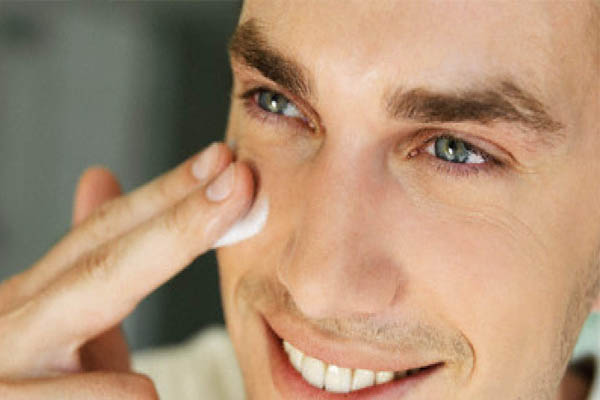 There are many things most men won’t admit too: extra-marital affairs (understandably), being a poor fighter (boardroom or back alley) and owning, wearing or even considering concealer.

Despite the latter being the most innocent of the lot, most guys would rather be caught trousers-down than seen dabbing a finger into a pot of make-up.Yet, concealer has been a secret weapon of well-groomed men for decades, responsible for the fresh faces of just about every A-list actor, model and musician on the red carpet. Instead of make-up, think of concealer as camouflage – a way of hiding annoying dark circles, redness, spots. And done right, no one even has to know. Here’s how.

Essentially a pigment in cream or liquid form, concealer is used to, well, ‘conceal’ any kind of imperfection on the face. A flare up of rosacea the night before a job interview? A colossal spot hours before a first date? Concealer can help it go unnoticed.

A quick pat under the eyes, a rub around the nostrils, a dab on angry ingrown hairs and they’re gone. It’s a quick, easy way to make sure you look like your best Instagram-ready self.

How To Choose Concealer

Concealer Type
There are only a few types of concealer that you need to pay attention too: cream concealers, liquid concealers and stick concealers. Liquids and creams vary in ‘coverage’ (the opacity of the product) and are far more bendable than their stick counterparts. If dark circles, redness or small spots are bothering you, these two are the ones to opt for. Stick concealers are the heaviest and will often give full coverage, making them ideal for more severe blemishes and hyperpigmentation.

As well as what ails you, it’s important to consider your skin type when shopping for concealer. Oily skin, for example, requires something matte that can absorb grease without contributing to an even shinier face. For dry types, something hydrating will stop the product from sticking to flaking skin and appearing visible. After all, if others can see it, you’ve gone wrong.

As a general rule, if you want to brighten areas – such as dark under-eye circles or dark pigmentation – you should pick a concealer that is two shades lighter than your skin tone. For covering spots, however, you want to get as close to your current skin tone as possible, otherwise you’ll be drawing attention to the area.

Using concealer doesn’t have to be complicated. In fact, getting a more handsome mug can be as simple as paint by numbers. Concealers with a green, purple or pink hue rely on colour theory to ‘correct’ discolouration – essentially using opposites on the colour wheel to cancel each other out. Don’t worry, while it looks odd going on, it blends right in.

Where To Put Concealer

You can put concealer on any area you need to (acne can happen in most places, after all) but under the eyes, around the nose and around the mouth are the most common areas of irritation. Don’t neglect the neck either – after shaving it can often come out in a bumpy red rash, which can be easily hidden.

How To Apply Concealer

Ignore brushes, sponges and any other tools the make-up industry might try to force into your hands. Fingers are all you need to apply concealer. The heat and natural oils on your (clean) digits are the perfect thing to melt the product into your skin. Apply it to your fingertip then press it into the skin, using your index finger in repeated dabbing motions to blot and blend

Change your Look and Style with Bespoke Tailored Suits

5 Things You Should Keep in Your Wallet

8 Ways to Gain Control of your Life