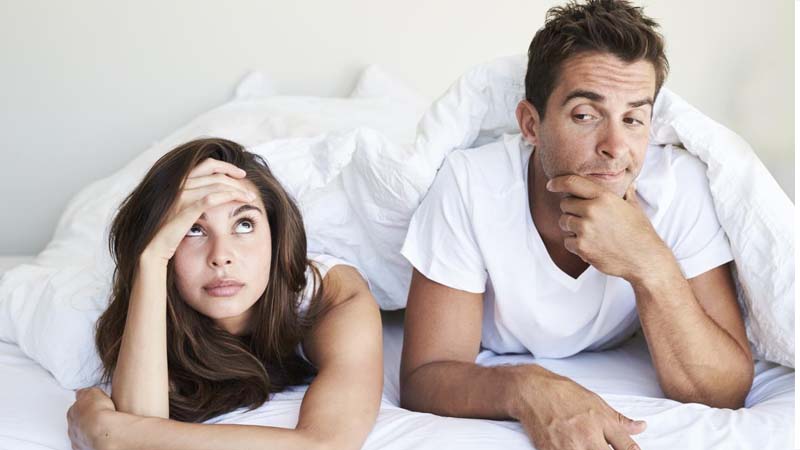 As much as you love your partner, being around them 24/7 isn’t exactly ideal. Yet that’s precisely the scenario so many couples have found themselves in due to the coronavirus pandemic.

It goes without saying that sharing a space for living, working, eating, and even exercising can pose all kinds of challenges for couples. Suddenly, boundaries are blurred, alone time is a rarity, and it’s difficult to get that much-needed breathing room during a conflict. Here’s the good news, though: According to an April survey conducted by app Lasting and “The Knot,” a majority of quarantined couples report strengthened relationships as a result of sheltering together. Not only that, but 66% of married couples who were surveyed said they learned something new about their spouses during quarantine, with 64% of engaged couples admitted that quarantine reminded them of what they love about their partners. Pretty promising, right?

Particularly for couples who weren’t already living together pre-pandemic, or who had just recently begun cohabiting, a “honeymoon phase” takes place at the start of quarantine. Meaning, sex on the kitchen floor during a work-from-home lunch break, teaming up to cook extravagant dinners for two, and snuggling up for Netflix screenings every night is the vibe.

“When I asked a dear friend of mine how he and his relatively new girlfriend were doing after a month of quarantine, he answered, ‘The first three years of marriage have been great!’” jokes Dr. Jordana Jacobs, licensed clinical psychologist specializing in love. “Overall, couples are being launched into deep relationships much faster than they would have been naturally.”

While this may be scary for some, others are finding excitement and passion in this new chapter. Quarantine has not only eliminated some of the everyday distractions, but has also presented an endless array of potential new experiences to share.

“These couples are thrilled by the quick progression of safety and intimacy offered by time spent together, day after day, 24/7,” explains Jacobs.

Ultimately, that initial bliss experienced by couples stems from novelty. Even couples who have been together for a long time can experience this honeymoon phase if they’re trying new things together in quarantine rather than getting trapped in tired routines.

That blissful euphoria inevitably dies down at some point as you both settle into your new normal. Suddenly, the fact that your partner paces around while on a work call or forgets to get dish soap at the store is more irritating than humorous or adorable. Maybe it gets to the point where the sound of them breathing annoys you. Sharing a space day in and day out is already enough to cause some tension — now, toss in the stress of this alarming outbreak, and it’s a recipe for impatience, annoyance, and frustration.

It’s not natural to be in each other’s presence every minute of the day, but right now, you don’t have the option to go out and grab drinks with coworkers, hit the gym, or hang with a friend.

“Too much time together takes away the time needed to miss our partners, as well as our opportunity to experience other life events away from our partners,” says relationship expert Dr. Laurel Steinberg, PhD. “Time away also gives us the opportunity to assess how we feel about our partners and for us to gather interesting conversational fodder. As a result, when couples are forced to quarantine together they may begin to feel irritated at one another, even if they are perfect for one another.”

Whether or not you or your partner struggled with anxiety or depression before the pandemic, it’s understandable if the current circumstances take a toll on your mental health. Steinberg explains that these issues can manifest in many ways, and symptoms may include general irritability, apathy, exhaustion, or trouble sleeping. Additionally, sex and relationship expert Dr. Tammy Nelson, PhD, adds that it can also feel like general dysphoria.

“Spending 24/7 together seemed fun at first,” she says. “Now, you’re sinking into ‘survival mode.’ This can lead to a shut-down of emotion — couples can feel like they have nothing to look forward to and feel generally discouraged about life.” The key here is to separate your emotions in response to the pandemic from what you may be projecting onto your partner and your relationship.

“For example, instead of saying ‘I’m bored,’ some may be inclined to place responsibility on one’s partner by saying ‘She’s boring,’” suggests Jacobs. “Or instead of saying ‘I’m anxious about the future,’ some may say to themselves ‘I’m anxious because my partner is not willing to plan a future with me.’ You have to be careful not to blame your relationship, which is somewhat in your control, for what you feel about the world, which is far beyond your control.”

Found that you and your partner are bickering more than usual after a few weeks of quarantine? You’re not alone.

According to Steinberg, many couples have found that they’re trapped in a cycle of having the same fight over and over. As expected, it’s likely due to a combination of being in such close quarters, as well as dealing with the uncertainty of the pandemic and stressful decisions it’s presented.

“Some of the most common themes couples fight about are emotional safety, intimacy, and responsibility,” says Jacobs. “Quarantine can actually be a unique time to work through core issues. Rather than distance yourself, become distracted or give up, which we may typically do in regular life, you are now forced to really face your partner, to attempt to see and understand them, to tackle these issues head-on.”

How to Have a Hot Fling After Divorce

8 Ways to Surprise Your Partner

10 Things That Happen After You Get Engaged