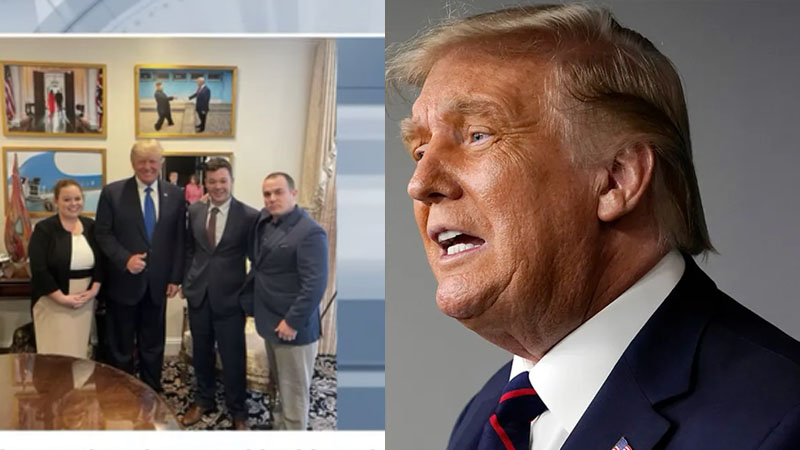 Former President Donald Trump said Tuesday that Kyle Rittenhouse paid him a visit at Mar-a-Lago after the 18-year-old was found not guilty of shooting and killing two men and injuring a third during a racial justice protest in Kenosha, Wisconsin.

Trump referred to Rittenhouse as a “fan,” and said the 18-year-old paid him a visit in Florida with his mother.

“Really a nice young man. What he went through — he should’ve, that was prosecutorial misconduct. He should not have had to suffer through a trial for that. He was going to be dead. If he didn’t pull that trigger, that guy that put the gun to his head, in one-quarter of a second, he was going to pull the trigger — Kyle would’ve been dead,” Trump said in an interview with Fox News‘s Sean Hannity, who showed a picture of Rittenhouse with the former president.

“Just left Mar-a-Lago a little while ago and he should never have been put through that. That was prosecutorial misconduct, and it’s happening all over the United States right now with the Democrats.”

Rittenhouse was acquitted by a Wisconsin jury last week. In August 2020, the teen was armed with an AR-style semiautomatic rifle and claimed he was acting in self-defense and had come to Kenosha to protect property and provide medical assistance during the unrest. The shooting of Jacob Blake, a Black man, by a white police officer ignited the protests.

During his trial, Rittenhouse stated he shot to defend himself after being attacked and fearing for his life.

After the murder of George Floyd by then-Minneapolis police officer Derek Chauvin, the case became a political lightning rod during the 2020 presidential campaign and months of protests against police brutality and racial injustice.

The right’s lionization of the 18-year-old has continued to politicize the Rittenhouse trial. Legal defense funds have been established in his honor, and social media memes have portrayed Rittenhouse as a hero. Republican members of Congress have stated that they would offer Rittenhouse an internship, and Trump has raised funds as a result of his acquittal. The left has portrayed him as a symbol of unchallenged gun-toting vigilantism.

During Monday’s interview, Rittenhouse stated repeatedly that his trial was not about politics.

January 6. Riot Organizers say they had “Dozens of Meetings” with GOP Members ahead of Capitol Insurrection