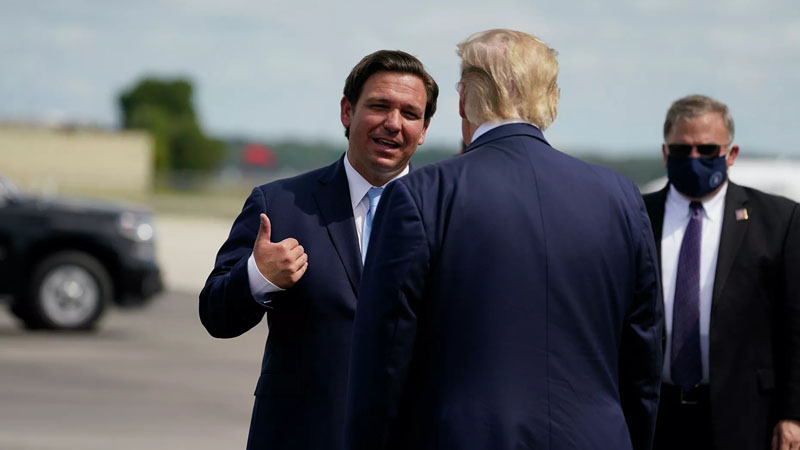 Virtually all polls over the past year have shown that Trump if he decides to run, remains the undisputed leader of the Republican primaries in the 2024 election. But when pollsters remove Trump from the hypothetical lineup, DeSantis is the favorite of Republican voters.

“In the context of the 2024 election, he [Trump] usually gives DeSantis a pop in the nose in the middle of that type of conversation,” a source who recently spoke to the 45th about DeSantis claimed. “He says DeSantis has no personal charisma and has a dull personality.”

According to the insider, Trump makes a point of stating that he is unconcerned with the Florida governor as a prospective 2024 opponent. Both Republican politicians are among the most popular in the GOP in the country, and Trump is reportedly irritated by DeSantis’ popularity and refusal to rule out a run against him in 2024.

The reason for Trump’s annoyance with DeSantis, according to a second source familiar with the situation, is “that Ron DeSantis won’t say he won’t run [in 2024]. … The others have stated pretty clearly they won’t challenge him.”

Several potential GOP presidential candidates have either ruled out running if Trump runs, or stated their support for the former president if he does. Republican Governor of South Dakota Kristi Noem and Senators Marco Rubio of Florida, Rick Scott of Florida, Tim Scott of South Carolina, and Josh Hawley of Missouri are among others who have expressed their support for Trump should he run. According to Axios, these endorsements have already piqued Trump’s interest.

There are two potential opponents to the ex-POTUS: DeSantis and former Vice President Mike Pence, as neither has ruled out challenging Trump in 2024. According to Axios, however, Pence seems to bother Trump less than DeSantis.

The former president has reportedly informed aides that he believes Pence’s political career is done after he rebuffed Trump’s request to send electors back to the states on January 6, 2021. Trump reportedly believes “there’s no way” DeSantis would have become governor without his support.

“What’s the big deal? Why won’t he just say he’s not going to run against me?” he allegedly told someone in his inner circle.

However, DeSantis has apparently not shied away from firing back at Trump, including for his not-so-subtle criticism, either. One of the governor’s biggest regrets in office, he claimed on the “Ruthless” podcast last week, was not speaking out “much louder” in March 2020, when Trump recommended staying at home to slow the spread of the novel coronavirus.

In a recent interview, Trump, without mentioning anyone by name, apparently took a shot at DeSantis and a slew of other politicians for not disclosing their vaccination booster status.

US media frequently reports about the so-called Trump-DeSantis feud, stating that Trump’s personal dissatisfaction with DeSantis’ ungratefulness and willingness to oppose him dates back several years. But DeSantis said on the podcast that allegations of friction between him and the former president were fabricated.

However, he dodged a question regarding his chances of becoming the Republican presidential contender in 2024.

Apart from those already mentioned, Former Secretary of State Mike Pompeo, as well as Senators Ted Cruz (R-Texas) and Tom Cotton (R-Arkansas), have not publicly ruled out a run against Trump.

Prince Harry ‘grew up quickly’ in a relationship with Meghan Markle

Trump’s move to Mar-a-Lago was a significant gain to New York prosecutors: “How is that legal?”