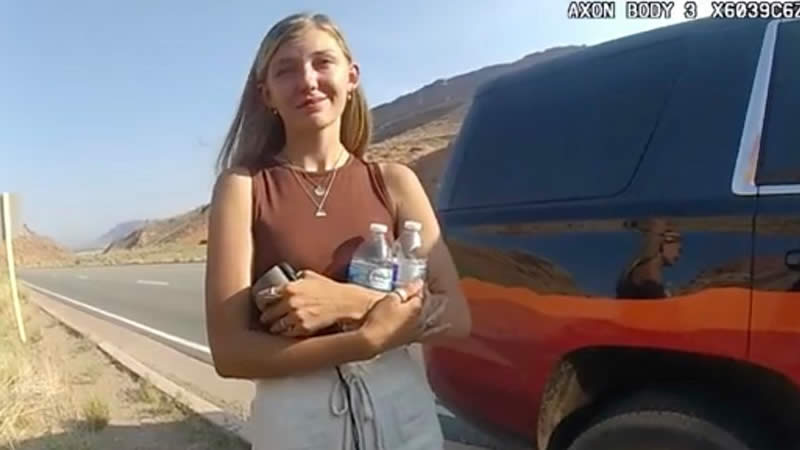 Gabby Petito pictured on police body cam after the couple were pulled over by officers on 12 August. Photograph: AP

On Sept 21, according to Reuters, A body discovered in a Wyoming national park has been identified as Gabby Petito, the young woman who went on a road trip with her fiance, and her death was declared a homicide, the FBI said.

The verification is the latest twist in a story that has captivated Americans since Petito’s family reported her missing on Sept 11, 10 days after her fiance, Brian Laundrie came home from the cross-country trip without her.

Laundrie, 23, has been identified as a “person of interest” by the investigators. Laundrie has been missing since he left his Florida home in North Port on Tuesday. Before disappearing, Laundrie refused to talk to the authorities.

Petito’s father, Joseph Petito, tweeted a photo of his daughter, which shows her standing between two painted wings, it was captioned with a broken heart and the words: “She touched the world.”

Laundrie’s parents told the FBI that they last saw him a week ago, when he told them that he was going on a solo trip in the 24,000-acre Carlton Reserve wilderness area.

North Port police said that they have continued their search of the swampy reserve. The police had earlier canceled the search after “exhausting all avenues” to find Laundrie.

FBI searched his parents’ home, executing a search warrant, taking away cardboard boxes, and dragging away a silver Ford Mustang.

Petito and Laundrie left New York state in late June, heading west in the van with plans to visit national parks and documenting their “van life” trip on social media.

Police in Moab, Utah, released footage from the August 12 traffic check, in which two of their officers encountered the couple.

Does Cassie Laundrie know more About Brian’s Disappearance, Dog the Bounty Hunter Seems to think so