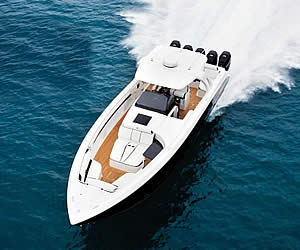 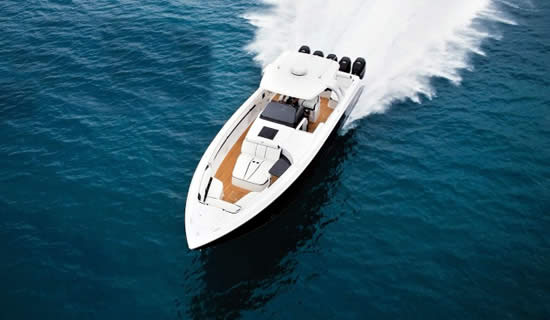 Cigarette Racing and AMG have collaborated on the newest version of the Huntress performance boat, which was officially unveiled this week at the Miami International Boat Show. A little more roomy than classic go-fast boats, the 42-foot Huntress is ten feet high, has an 11-foot, 9-inch beam and a cabin below decks providing luxury accommodation for two. Oh, yes – it also comes with a 500 gallon (1982 l) fuel tank and five Mercury Racing outboards that can push it up to 78 mph (125 km/h or 68 knots).

The classic go-fast boat is designed with a long narrow platform and a planing hull. Originally called “rum-runners” during America’s experiment with Prohibition, the term was later replaced by “cigarette boat” when used to smuggle tax-free cigarettes from Canada. While the Huntress won’t keep up with full-blown go-fast boats, it will be a lot more comfortable.

The new Huntress is the third boat design to come out of the Cigarette Racing/AMG collaboration. While the Mercedes-Benz G63 AMG Luxury SUV is touted as the inspiration for the Huntress, this writer has considerable difficulty seeing a direct relationship, save for the state-of-the-art engine and transmission, and the luxury interior. The Huntress is a vision of speed and elegance, while the G63 looks like the military light armored vehicle from which it was developed. I just don’t see it. 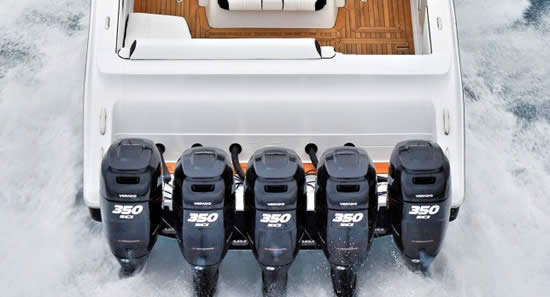 he source of the remarkable performance of the Huntress is five Verado 350 SCi Mercury Racing outboards (technically the Huntress is available with four Mercury 300 Verados, but we all know how it should be equipped). Each of these supercharged 24-valve double overhead cam in-line six-cylinder engines has 158.5 cu in (2.6 l) displacement. Somehow they manage to produce 350 horsepower (263 kW) without blowing up when running at 6400 rpm. The five of these bad boys at full tilt drink 2.5 US gallons (9.5 l) of premium gasoline each minute, limiting the 500 gallon (1892 l) fuel tank to just over three hours at top speed, giving a racing range of about 260 miles (415 km). 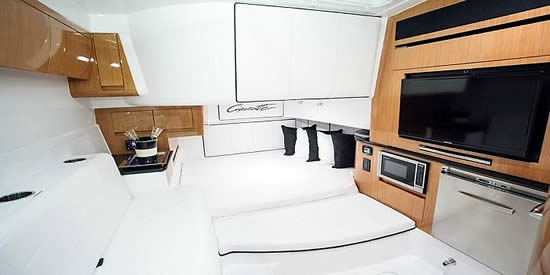 The Huntress has a twin step deep-V hull with classic lines. The overall weight of 18,900 pounds (8590 kg) has been trimmed to offset the size and luxury of the craft through use of a lightweight composite structure and framework. The thought given to detail is illustrated by the inward-opening side door, made near-impregnable by hinges and handles which are built into the gunwale. The handling of the Huntress is assisted both by the twin step hull design and by the electro-hydraulic steering built into the Verado outboards.

The stunning helm is ergonomically designed with a CNC double-anodized dash panel whose controls are grouped together by function. The dash can be equipped with three Garmin GPS screens and four Garmin Digital Marine Instrument displays to keep track of the engines. Radar and sonar can be added to the Garmin GPS systems if desired.

The helm includes pull-down bolster seats which allow the driver and navigator to stand or sit. The cockpit includes a high-end audio system and multiple air conditioning vents, as well as controls for a bow thruster for easy slow speed maneuvering.

The deck of the Huntress is well designed for a racing run or for a day’s holiday out on the water. Although listed as a center console by Cigarette, the console actually forms a peninsula which is attached on the port side, thereby leaving free a roomy traffic lane between the bow and stern decks. Speaking of which, the seating and lounging areas do show the influence of the G63, as they are elegantly upholstered with stitched patterns. 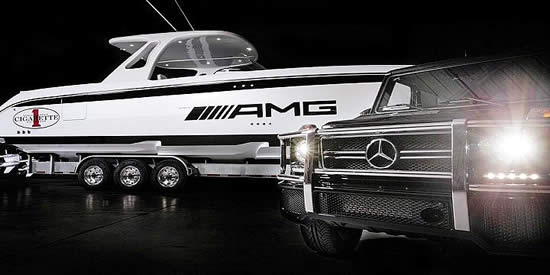 The newly designed “T-Top” of the Huntress is hardly an add-on. Rather, the intensely engineered aluminum structure is attached directly to the vessel’s stringers, providing additional torsional stability to the boat. Such added strength is needed when throwing the boat around in choppy conditions. 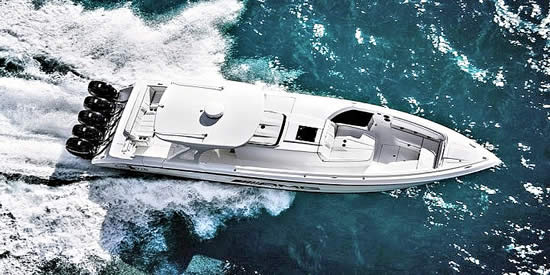 Special attention was given to the cabin, which could be raised to unexpected levels of luxury owing to the increased beam of the Huntress. The door to the cabin is on the port side of the deck within the peninsula of the console. A companionway leads down to a remarkably large scale cabin. Sporting more than six feet of headroom, the cabin includes a large sofa which converts into a double bed, a mini-galley, flat screen television, and a sink outside a head with vacu-flush toilet and shower facilities.

Overall, Cigarette Racing’s new Huntress is a remarkably well conceived and carried-out bit of nautical engineering. As with all such vessels, however, there is a serious, but not unexpected, difficulty – the price. In its basic configuration, the price for the Huntress has been announced at US$750,000 (€565,000) … then there’s the US$2500 (€1900) to fill the fuel tank! – Gizmag

The 42m Ocean Supremacy – Largest and Greenest Superyachts in The World