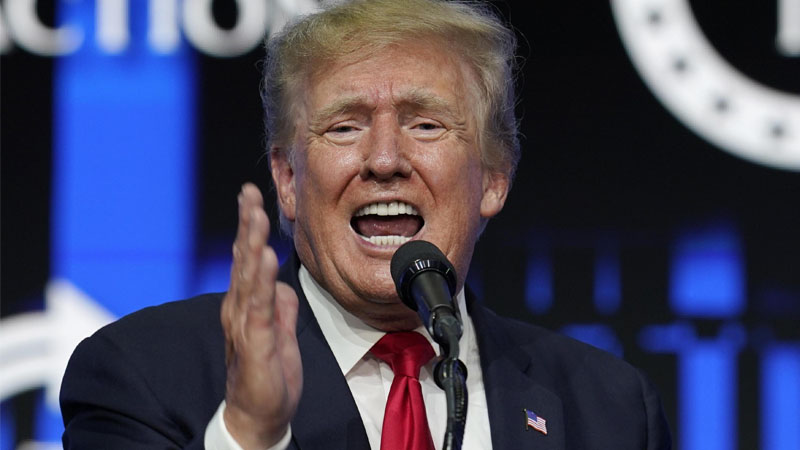 In a speech Saturday packed with rhetoric from the culture war and digs at his political foes, including President Biden, the January 6 Committee, and others, former President Donald Trump made a hint that he would run for president in 2024.

On the second day of the Turning Point USA Student Action Summit, the speech served as the keynote. Florida Governor Ron DeSantis, who is regarded by Trump as one of the top potential GOP candidates for the year 2024, spoke after Trump on Friday night, as per Fox News.

“If I stayed home, if I announced that I was not going to run for office, the persecution of Donald Trump would immediately stop,” Trump also said later in the speech. “But that’s what they want me to do. And you know what? There’s no chance I do that.”

The comments followed Donald Trump Jr.’s earlier evening response to a question from Fox News Digital, in which he did not rule out the potential that Trump would declare his candidacy for president before November.

School controversies, such as critical race theory, were among the issues Trump raised in his culture war talks.

“Across the United States, we need to implement strict prohibitions on teaching inappropriate racial, sexual, and political material to America’s children in any form,” he said.

“You would not trust these people to babysit your children for 20 minutes. And why should we then let them educate millions of American students six hours a day, year, after year, after year,” he added.

“It’s not politically correct to do what I just did… people are not allowed to talk about it,” Trump said.

Trump continued to criticize the Biden administration for forcing military members to receive the coronavirus vaccine. According to him, the United States ought to “rehire every patriot who was brutally discharged from the military with an apology” and “back pay.” And he claimed that the right must fight corporate culture wars in a similar way to how Democrats do.

“The radical left attacks those corporations by putting boycotts on them, and for some reason, Republicans and the right they don’t do that,” he said. “The only way to stop this extremism and get radical politics out of corporate boardrooms and human resource departments is if we do to the left exactly what the left does to us.”

Among other things, he attacked Rep. Adam Schiff, D-Calif., over claims that Trump colluded with Russia during the 2016 election and referred to the Jan. 6 Group as a “unselect committee of political thugs.”

Trump ended his speech by again seemingly hinting at a future presidential bid by claiming that Biden’s presidency had made his reelection campaign slogan, “keep America great,” outdated. But “we will make America great again,” Trump asserted.

A 15-year-old girl with a rare disorder, who inspired the entire world by openly discussing her life, dies