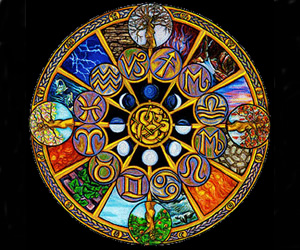 There is a mix of professional pressure and urgency in the air this week, which you’re able to channel into motivation. The pressure is on Pluto and your career sector, with Uranus bringing some reality checks and a call for you to remain true to yourself. This may call you to question your professional direction or past choices, but it’s the kind of pressure that pushes you on rather than the kind that creates roadblocks. At the same time Mars, warrior planet of the cosmos is moving into his final and most urgent weeks in your work sector and mid week reaches a point where he’s just 2 weeks away from leaving and from wrapping up a nearly 8 month visit, his longest in 47 years. You’ll uncover more clues next week, but until then put everything you have into everything you do.

On Monday Saturn reaches a point where he’s just 7 days away from turning direct in your work sector and while this will see the tide turn, in order to make that U turn he has to come to a stop. Barely moving at a crawl at the start of the week forces on the work front will have come to a stop by the weekend, yet rather than feeling that things have become stuck or stalled, a growing sense of anticipation is allowing you to see beyond any short term delays. It’s Saturn’s close relationship with forces on the income front and the fact that by midweek Mars will be just 2 weeks away from your work sector, that is giving you the confidence to sense that the U turn ahead is likely to be significant and game changing, appreciating the importance of working behind the scenes while you can.

Things have taken a real backseat on the professional front and that’s just the way you want it to be. It was Chiron’s retrograde turn in your career sector last week, just a week after Neptune turned retrograde there, that has put the only two planets that are active in either of your professional houses in retrograde motion. With nothing driving things forward and the doors to the past wide open, this gives you a chance to pull back and retrace your steps. With both staying in retrograde motion until November and new doors not opening on the work front until August, you have a chance to process and work with what is already on the table. This also gives you a chance to focus more on your income and as new doors open there a chance to look at where the money is.

While there may be some professional pressure this week, on both the work and career fronts, but this does not represent problems or challenges and more that you’re receiving some timely wake up calls. The work pressure on Monday is fleeting, for it’s simply the Moon moving into opposition with the North Node in your work sector, providing what is nothing more nor less than a monthly wake up call. It may however create a case of Mondayitis. Pressure on the career front is more significant and is coming from the fact that Pluto is putting pressure on Uranus in your career sector, which will come to a head over the weekend. However, this is the kind of pressure that is forcing a truth to the surface, a truth that once acknowledged could be game changing.

When Jupiter left your career sector last week he brought an active 14 months to an end. It was the Moon’s return just a few days later that gave you a chance to sharpen your professional instincts and get your bearings. The Moon only left on Sunday, allowing you to move into the new week with your professional instincts sharp and a much clearer sense of where to from here. With no more planetary activity in your career sector until April 2011 all your cards are now on the table and with a massive tailwind at your back you’re unlikely to lose your momentum anytime soon. Pluto, now the only planet active in either of your professional houses, is feeling the pressure from all this sole responsibility, which may be creating some work pressure as you adjust your professional load.

As Jupiter spends his first full week in your career sector Venus is spending her last full week in retrograde motion and the Sun his final days. With Jupiter focused on the future and the long term, the Sun on the short term future and Venus on the road behind, this could prove confusing as you stand at an important professional crossroad. This makes the Moon’s position in your career sector as you move into the new week a case of good timing, for with your professional instincts sharp you’re able to get your bearings and an intuitive read on things. It’s on Wednesday, during the Sun’s last full day in your career sector that the Sun and Moon will align to form the second New Moon here in as many weeks, creating a chance to draw a new line in the sand.

With Mercury not due to leave your career sector until early next week, you have another full week where you’re able to work with this smart and intellectually savvy planet to get your professional year up to speed. It’s the arrival of the Moon on Wednesday and the Sun on Thursday that takes things to the next level, with the Moon ensuring your professional instincts are sharp during Mercury’s final hours on his own and as the Sun returns. With the Moon leaving your career sector on Friday and then Mercury next Tuesday, it will be the Sun that will keep the momentum going, with a chance to put your professional instincts, ideas and objectivity on the same page. This gives you a chance to take a more serious approach to looking at where to from here.

Mercury’s return to your career sector next Tuesday will kick off the most important and defining professional months of the year. Until then you have both an obstacle to get through and some timely insight to absorb, each ensuring that when new doors start to open from next week that you’re ready. It’s the Moon’s last visit to your career sector before Mercury returns that will both sharpen your professional instincts and provide some timely clues, but also give you a read on any work pressure building. The Moon returns on Friday and will spend the weekend in your career sector, just as work pressure is peaking. As any work pressure is more about a truth that is trying to be heard, this will ensure that you have your finger on the pulse and your ear to the ground.

While Jupiter left your work sector last week, wrapping up a 14 month period of continuous planetary activity, the Moon’s return a few days later keeps things in play. The Moon only left your work sector on Sunday, so the messages and insights are still clear, allowing you to move into the new week with your finger on the pulse and your ear to the ground. Hold onto this, especially when it comes to matters on the work front, for this is a week where career matters will dominate. With Mars now the only planet active in either of your professional houses and due to leave early next month, a new sense of urgency is setting in when it comes to the big picture and developing a clear sense of where to from here and of what you need to be fighting for. It’s time to take the gloves off.

Jupiter’s first full week in your work sector was always going to put a lot of focus on your work situation, creating an opportunity for a fresh start, but with Venus in her last full week in direct motion and the Sun his final days before leaving on Thursday, this creates even more intensity. What brings you to a crossroad is the New Moon in your work sector on Wednesday. This opens the door to new beginnings and a chance to make a commitment to the expansive year that stretches out in front of you. But with Venus still in retrograde motion in your work sector, Saturn his last full week in retrograde motion in your career sector and Mars just 2 weeks away from becoming involved, the door is also open to second chances. This is a week for putting everything on the table.

When Mercury returns to your work sector next Tuesday he will kick off the busiest 3 months of 2012. In this final week before new doors open and things start to move on the work front take the time to focus on the things that will help things run smoothly later on, ensuring that you’re match fit when the opening whistle sounds. This week the two issues that you most need to address are any work/life balance issues, which will come to a head in a small way earlier in the week, but if not dealt with could come back to haunt you later in the month. The other issue is on the income front, where a truth is trying to be heard and in the effort to get out and get your attention may push some buttons. However, any pressure is more likely to be some timely wake up calls trying to get through. – Freepsychicnetwork