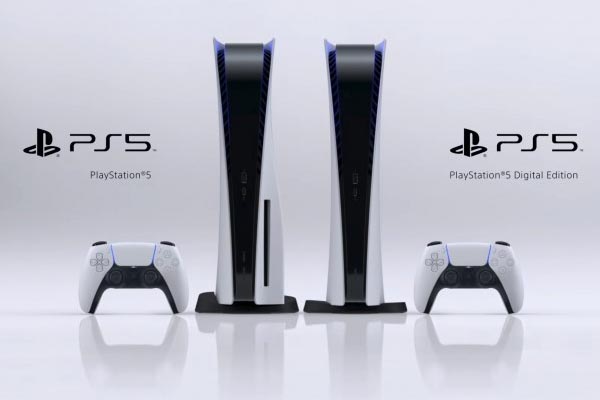 After months of secrecy, Sony at long revealed the planning of its next-generation PlayStation 5 console. Actually, it unveiled two of them, a standard version edition and a digital edition with no optical drive.

The PlayStation 5 features has a smooth, structure overwhelmed by white boards panels on either side sandwiching a curved black interior. the middle portion has what resembles like a typical standard USB-A and a USB-C port on the front alongside blue LED lighting and vents along the top bend. The back of the console stays a secret for the time being.

The PS5 is placed inside a vertical stand, something Sony has consistently had for its consoles starting with the PS2. Whether this stand is a component of the planning or a different accessory is yet mysterious.

The two consoles are set apart by the lack of the 4K UHD Blu-ray drive on the Digital Edition. This model is solvent and features a more symmetric design while the quality standard edition is bulkier and somewhat more awkwardly proportioned.

The general structure design aesthetic is actually the kind of outlandishness that one would anticipate from the primary iteration of any new PlayStation generation. It matches the Dual Sense controller plan impeccably, which already herald the white and black aesthetic back in April. Compared with Microsoft’s unmistakable and minimal Xbox Series X structure design, the PlayStation 5 appears as though something out of sci-fi.

Sony also displayed a variety of accessories for the new consoles. We have just been made acquainted in the previously mentioned Dual Sense controller, which can feature haptic feedback and a built-in microphone. there’ll even be a Charging Station for charging two Dual Sense controllers simultaneously, an HD Camera for possible motion tracking another Pulse 3D Wireless Headset, and ultimately, a Media Remote for utilizing the console as a Blu-ray player and streaming box.