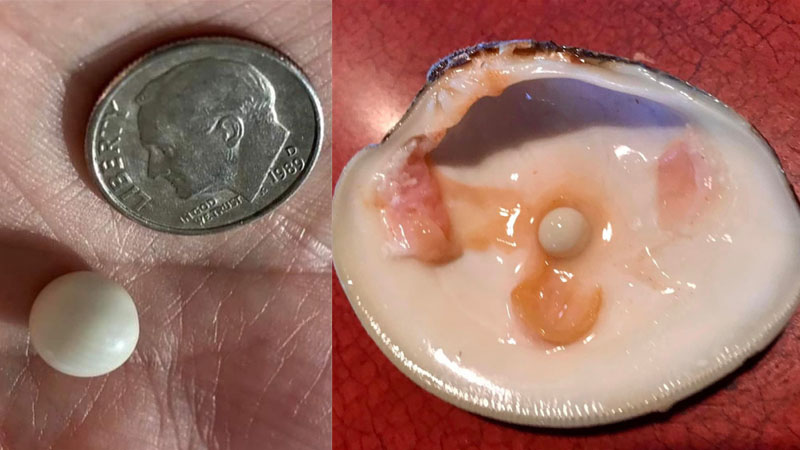 When Michael Spressler bit into a raw clam two weekends ago at the famed Jersey Shore restaurant The Lobster House, he felt something hard in his mouth.

Pressler, 58, of Brick, told NJ Advance Media on Monday, “I thought one of my molars cracked.” The smooth, round item on his tongue, however, was not the result of a broken tooth.

According to Pressler, the pearl was possibly worth thousands of dollars. The pearl could be worth as little as $50 or as much as $100,000, depending on the body of water it came from, according to The Pearl Source website.

“I actually thought it was like a little stone or something,” Pressler said. “But then when I poked it out into the palm of my hand, it was a perfectly round white pearl.”

Pressler found the pearl while visiting his favorite South Jersey restaurant, The Lobster House on Schellenger’s Landing Road, on the other side of the bridge leading into Cape May. Pressler and his wife, Maria, have been eating there since the 1980s, he says.

“For all the years that we were going down there, as soon as we would get off the Garden State Parkway and go over the bridge, our first stop would be The Lobster House to eat, because to me they have the best seafood in Jersey,” he said.

Pressler almost always orders a dozen raw clams on the half shell as an appetizer. He tops them with hot sauce or cocktail sauce and spritzes them with lemon, he explained.

“I’ve been eating clams all my life. This is the first time this ever happened to me,” Pressler said, adding that people he’s spoken to and the internet research he’s done indicate the chances of finding a pearl in a clam are 1 in 10,000.

Maria Spressler stated that she would like to keep the pearl, which measures 8.83 millimeters in diameter, and have it set in a ring or necklace with a mermaid or something else that reminds her of the sea. But Michael Spressler is more interested in determining the item’s worth.

“She wants to put it in a piece of jewelry or something, but I’ve got to get it appraised first, to get some kind of value,” he said. “(I’ve heard) it could be worth thousands, but I don’t know how much it’s worth. I really don’t know and I’d like to know.”

RSPCA Rescues Fox with Head Stuck Inside Watering Can in Essex

‘She is a Traitor’: Melania Trump Raging Over Ex-Aide Stephanie Grisham Who’s Become Trash-Talking Television Pundit—‘How Can She Get Away With This?’