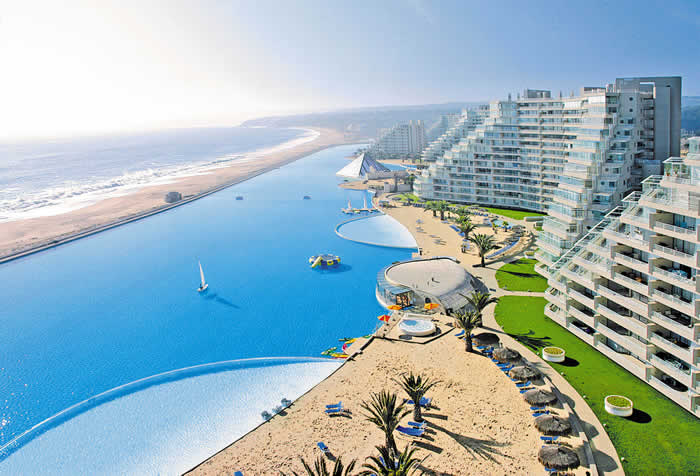 Isn’t a pool just a giant tub of chlorinated water? How the hell do they get so expensive, then? Marble, water slides, mosaic tiles, and other awe-inspiring elements – that’s how. While researching the most expensive pools built throughout the world, some sources agreed and others had different ideas about which pools are the most expensive.

Such a thing seems strange to argue over; either a pool costs $10 million or it doesn’t. I guess, though, that some sources might take inflation into consideration or others might convert currencies more liberally. Whether this list is factual or as potentially untrustworthy as the ones I sifted through, a sparkling line-up of incredibly expensive and luxurious pools is what this is about, and we delivered.

It already sounds perfectly stunning and regal. “Where do you take the kids to swim?” “Oh, we live at the Hearst Castle, so we just swim in that $10 million pool we have lying around in the backyard.” But really, this pool – or pools, I suppose, as the Hearst Castle actually boasts 2 pools – was built around 1924 to the tune of $10 million. In case you were wondering, that’s a sweet sounding tune. We’re not sure whether that’s $10 million in 1924 or $10 million our time, but we’re hoping the latter, because the former undermines everything we’ve ever dreamed the 20s looked like. The elegant pool, built with marble and mosaic tiles, is privately owned by Mr. William Randolph Hearst, and apparently this is his castle. Move over, MTV. By the way, this fancy pool in California is the first and last time we see the USA on the list. It seems America’s unique craft for engineering all things absurdly lavish is – wait for it – sinking.

This pool is equally as expensive and just as private as the last masterpiece. Situated in London, the pool is owned by an “Israeli businessman” who — one should assume — goes by the name Lev Leviev. It’s easy to understand how the pool racked up such a high price tag when I tell you that it was constructed with mosaic tiles and gold. Yes, gold. I think I’ve read similar descriptions in the Bible, making this pool the most heavenly on our list! Also heavenly (or at least that’s what I hear) are the spa and steam bath associated with the giant pool. The Lev Leviev probably didn’t need anything more to make it the perfect venue for relaxation, but that mysterious businessman is apparently a bit of a spendthrift. Oh, did the $10 million pool give that away?

This $2 billion structure makes a mockery of those measly $10 million pools we just ooed and awed over. Oh well, onto bigger and better things! Speaking of big things, the Ocean Dome is the largest indoor pool in the world, coming in at a whopping 328,000 square feet. Don’t quote me on that number; I did the math myself. You get the idea – unbelievably massive indoor pool. The pool boasts a gnarly artificial wave pool, and I say gnarly only because surfers take to these artificial waves like they’re the real things. Also included are mock volcanoes. In case the fear of being trapped in the undercurrent of the wave pool wasn’t enough, you can focus on the sound of artificial volcanic eruptions. The giant Ocean Dome is also equipped with a water slide area. This pool (if you can call it that) is perfect for every water lover. Surfers, waterpark enthusiasts, swimmers, and volcano fans can all gather here in unrivaled merriment.

Another $2 billion pool, the San Alfonso sees the Ocean Dome’s “largest indoor pool” and raises it a 2008 Guinness World Record. Well played, Chile. The giant swimming pool took about 5 years to build, and with good reason; it’s about 20 acres in size. You thought maintaining a 20-acre yard was exhausting — how about the pool maintenance for this beast? I suppose the real question is: how do they fill that enormous swimming pool? With filtered sea water, which makes sense, since the ocean is the only source of water large enough to fill such a pool. Did I mention the pool gets up to 11 feet deep? It almost seems masochistic how difficult they’ve made filling this thing. I bet the maintenance crew cringes every time some over enthusiastic swimmer launches a cannonball into the water, quivering as that precious water splashes out of the enormous pool.

The most expensive pool in the world is the City of Stars, situated in Sharm el Sheikh. Fun fact: the enormous lagoon-esque  pool structure is made by Crystal Lagoons, which also has its signature on the our last pool, the San Alfonso in Chile. Along with the largest, 21-acre lagoon, there are 11 other lagoons staggered throughout this tourist attraction. Of course this project rang up a bill of about $5.5 billion, which is arguably more than most of our dates cost (though it doesn’t appear that way at the mall, does it?). Just like the San Alfonso, and probably because it’s pioneered by the same team, the water to fill the lagoons is pulled from the sea and filtered through technology that was specially created by Crystal Lagoons. If you research expensive pools, you might not find this behemoth on the list, because it’s relatively new compared to several others usually named. Constructed in 2009, the City of Stars easily surpassed all of the pools previously hailed as the most expensive.

Top 5 Most Expensive Desserts in The World