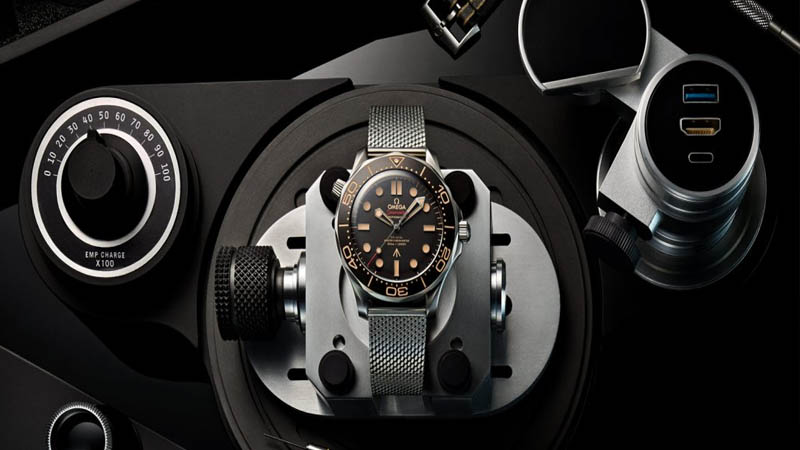 OMEGA has released a 007 Edition of their Seamaster Diver 300M OMEGA Co-Axial Chronometer (a.k.a. a watch, for the uninitiated).

Eagle-eyed viewers of the film’s first trailer may be thinking that this watch looks a little familiar — and they’d be right. The timepiece is identical to the one that James Bond sports in the upcoming “No Time to Die,” the 25th installment in the franchise.

OMEGA’s watch developers and designers worked closely with the filmmakers and Daniel Craig himself, tapping into their extensive knowledge of the iconic character. The watch has been constructed with Grade 2 Titanium and sports a tropical brown bezel ring and dial. Perhaps these features are nods to Bond’s tough exterior and his escape to island life after the events of the last film, “Spectre.”

“We decided that a lightweight watch would be key for a military man like 007,” Craig said of working with OMEGA. “I also suggested some vintage touches and color to give the watch a unique edge. The final piece looks incredible.”

The timepiece also features a few more subtle references to the British spy, like the military-style caseback engraving that includes the number 62 — the year the very first Bond film, “Dr. No,” was released.

Powered by OMEGA’s Co-Axial Master Chronometer 8806, wearers can rest assured that this 007 Edition Diver meets all of the highest industry standards of precision, chronometric performance and magnetic resistance. It also boasts a tough yet stylish Grade 2 Titanium mesh bracelet with an innovative adjustable buckle, but you can opt for a striped NATO strap in dark brown, grey and beige with 007 engraved on the loop if you feel so inspired.

The watch will be released in OMEGA boutiques this coming February. As for the price, you’ll have to contact your local seller to find out for sure, but the suggested price will set you back about $9,200.

How to Avoid Injuries Now That Gyms Are Re-Opening

Father’s Day 2020: Date, history, and significance of the day