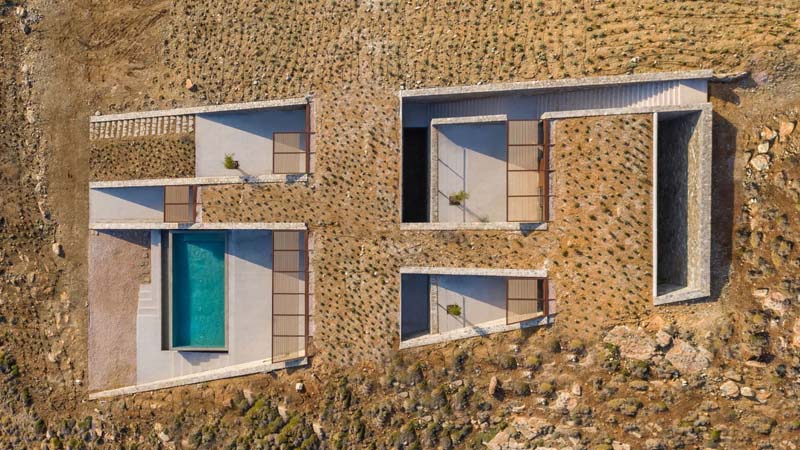 It would be easy to miss the NCaved luxury house among the rugged landscape of Greece’s Serifos island if you weren’t paying attention. Designed by Mold Architects, the home takes its place so well in the rocky hill that it seems to be part of it. NCaved was created in collaboration with structural engineers Studio 265 and is located on an enviable spot on a small secluded cove. It measures 360 sq m (roughly 3,800 sq ft), spread over three floors and is described as a “3D chessboard of solids and voids” by Mold Architects.

Construction involved diggers and other machinery removing a chunk of the landscape to make space for it. In all, the home took two years to complete and was finally finished in late 2020. The idea behind its sunken design is to provide shelter from strong winds in the area. Additionally, the natural insulating properties of all that rock and soil should help to keep the interior a relatively stable temperature.

“The need to create a protected shelter, at a location of disarming view, but openly exposed to strong north winds, led us to the decision to drill the slope, instead of arranging a set of spaces in line at ground level,” explains Mold Architects. “An in-caved staircase connects the three levels externally and leads to the main entrance, located at the living room loft. This smooth descent into the interior of the house slowly reveals the initially hidden spaces of the house, while framing a two sided view: a visual outlet to the sea during the descent, an outlet to the sky during the ascent.”

The interior layout is split between the main house and self-contained guest quarters, with the sunken exterior staircase running the length of the residence and connecting each space (though there’s also an internal floating staircase inside the main home). It’s fronted by a terrace area with a swimming pool.

Much of the interior living space is taken up by a large open plan room containing a kitchen and adjacent dining area, with a living space nearby that has sunken seating. The room opens to the terrace with large sliding glass doors. The master bedroom is also arranged so that occupants wake up to the view of the Aegean. The decor certainly won’t be for everyone with its generous use of concrete – plus shy retiring types will wince at the glass-encased bathroom – but it’s very well done and the addition of natural stone and wood softens the effect. The open layout and generous glazing also helps fill the interior with daylight.