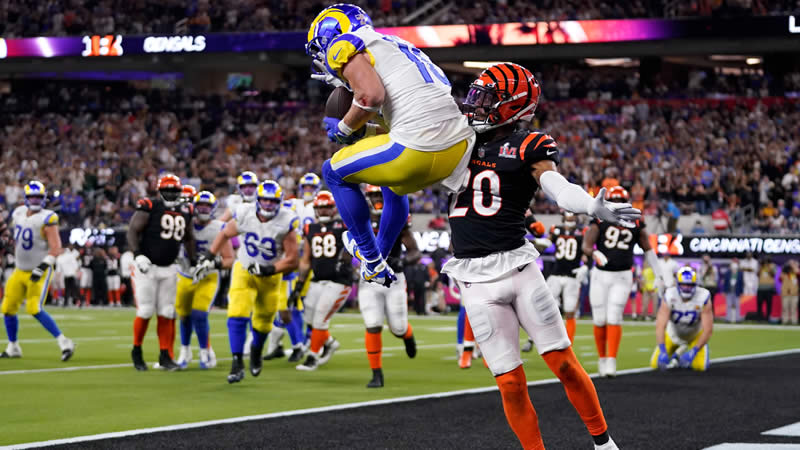 The Los Angeles Rams beat the Cincinnati Bengals to win the Super Bowl at SoFi Stadium in Inglewood, Calif., on Sunday. The final score was 23-20.

The victory gives the Rams their second-ever Super Bowl title and their first as a Los Angeles team. Their last and only win came in 2000, back when the team was known as the St. Louis Rams, against the Tennessee Titans.

It was a fourth-quarter touchdown with less than 2 minutes left that sealed the deal for the Rams. Quarterback Matthew Stafford’s short pass to Cooper Kupp finished a 72-yard drive.

“I’m so proud of this group, just proud to be associated with it,” said Sean McVay, head coach of the Rams, in a post-game interview.

Cooper Kupp was named the Super Bowl’s most valuable player. “I don’t feel deserving of this,” said the wide receiver, “just don’t have words, I’m just so thankful.”

The Rams started off the game strong in their home stadium. Odell Beckham Jr. scored the first touchdown off of a pass from quarterback Matthew Stafford, giving Los Angeles an early lead. Rams kicker Matt Gay topped off the run with an extra point.

In the second half, the Bengals picked up momentum to take the lead. In the opening play of the third quarter, quarterback Joe Burrow hurled a deep throw to Tee Higgins. The receiver leaps for the catch and fended off Jalen Ramsey to score a 75-yard touchdown, putting the underdog Bengals ahead 16-13.

Late in the second quarter, an apparent knee injury took Beckham out of the game when his foot caught the turf as he reached for a catch midfield.

In Beckham’s absence, the Rams’ offensive run slowed, forcing the team to rely more heavily on Kupp. The game’s MVP polished off his team’s late rally with his second touchdown to win the game.

A new study says, doing housework like washing dishes and gardening can reduce the risk of heart disease in women