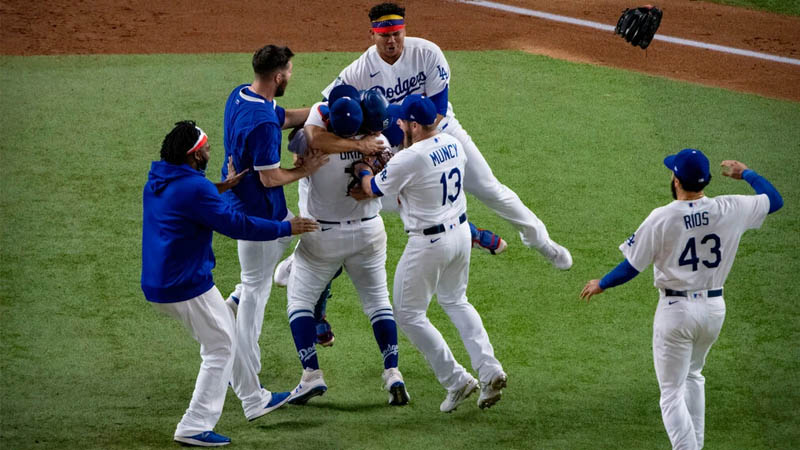 The Los Angeles Dodgers were the best team in baseball all season, and Tuesday night, walked away with the ultimate prize, holding the World Series championship trophy for the first time in 32 years.

Dodgers’ fans, who took over Globe Life Field, danced in the aisles, and screamed into the night, celebrating as if Orel Hershiser was back on the mound and Kirk Gibson was at the plate.

The Dodgers, defeating the Rays, 3-1 to win the World Series in six games, finally have their own heroes and piece of history to celebrate.

“We’ve heard it a lot and we’ve seen it a lot, the highlights (of the 1988 World Series),’’ said Dodgers manager Dave Roberts before the game, “and it’s fantastic. But I think that we want to make our own mark on Dodgers history.’’

There were plenty of heroes to go around for the Dodgers, but all anyone could talk about was the ultimate move that led to their glory.

It was the decision by Rays manager Kevin Cash to pull ace Blake Snell in the sixth inning, which backfired in a colossal way, instantly becoming one of the most managerial blunders in World Series history.

Snell, their 2018 Cy Young award winner, was putting on the greatest pitching performance of the entire postseason, and carving spots in the World Series record book with the likes of Sandy Koufax. He had given up only his second single of the game with one out, having struck out nine batters, and had thrown just 73 pitches.

The top of the order was coming up, and Cash did not want but Snell to face the order for the third time in the game. Cash walked to the mound, and didn’t even give Snell a chance to talk him out of it. Snell cursed and stormed off the mound.

The top of the Dodgers’ lineup — Mookie Betts, Corey Seager, Justin Turner and Max Muncy — had been clueless against Snell. They were hitless in eight at-bats with seven strikeouts. It was the first time all season that Betts, Seager and Turner struck out twice in the same game, let alone against one pitcher.

Yet, Cash stuck by the Rays’ playbook, called upon reliever Nick Anderson, who had struggled in the postseason, and immediately paid the price.

Betts greeted Anderson with a double into left field, putting runners on second and third. Anderson then threw a wild pitch, scoring Austin Barnes. Seager hit a grounder to first baseman Ji-Man Choi, who quickly threw to home but Betts, with a terrific jump, scored easily.

The Dodgers were up 2-1, and never looked back, with Betts homering in the eighth inning.

Just like that, Snell’s performance and Randy Arozarena’s heroics were wasted. Arozarena had a postseason for the ages, hitting his record 10th home run of the postseason in the first inning, and wound up with a record 29 hits.

Yet, the Rays couldn’t produce another run, and barely even made contact, after Arozarena hit Tony Gonsolin’s 84-mph slider into the right-field seats. The Rays had only three more hits after the first inning, and one was on a single by Arozarena.

They didn’t make a move at this year’s trade deadline, believing all along they had the talent after acquiring Betts from the Boston Red Sox on the eve of spring training, and it was certainly proven throughout the postseason.

“I think this group has come together,” Roberts said, “and this group is as close together as any team I’ve ever been part of.’’ And they will be forever remembered in Dodgers’ folklore.

It doesn’t matter that this was a 60-game season, or that the World Series was played at a neutral site, or even with the trophy called a “piece of metal,’’ the Dodgers are true World Series champions.

“This is one of the things we talked about,’’ third baseman Justin Turner said. “No matter how many games were to be played, if there is a championship to be won, we were going to do everything in our power to bring it home.’’ They sure did that, winning the most games in the regular season, and in the postseason.

They are champions of the baseball world. “There will be no asterisk,’’ Roberts said.

Pro Athletes and Trainers Share Their Health and Fitness Resolutions