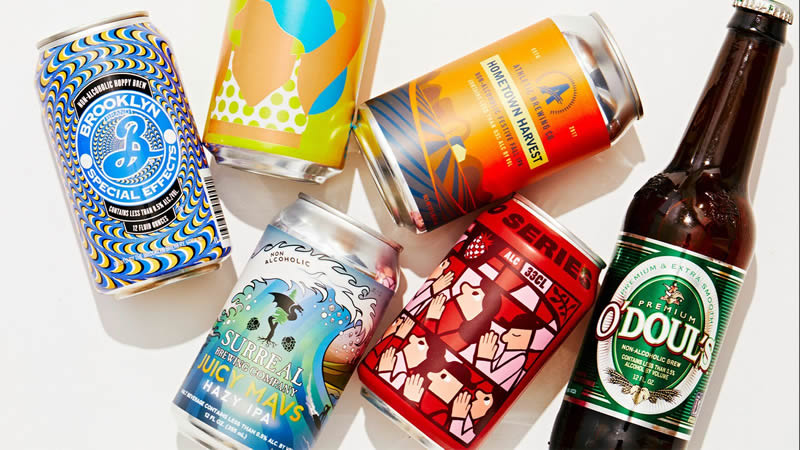 Non-alcoholic beers have come a long way since the days of Prohibition.

Why? That’s the first question you’ll have to answer holding a can of non-alcoholic (NA) beer at your next party. And while you may be inclined to offer up an excuse — “I’ve got a big meeting tomorrow.” “I’m training for a marathon.” “I have to drive, asshole.” — you shouldn’t give in. Today’s best NA offerings pack all the flavors found in traditional beer, with none of that next-day regret. So go ahead and have one. Then have another.

Calories: 80
ABV: Less than 0.5 percent
What We Like: One of the new kids on the block, Athletic Brewing Co. only makes NAs, and Free Way Double Hop IPA is the best of the bunch. It’s bursting with tropical hop notes and finishes with just the right amount of bitterness.

Calories: 80
ABV: Less than 0.5 percent
What We Like: Boulevard’s entry into the non-alcoholic beer world is courtesy of NA brewer Athletic Brewing. Flying Start absolutely nails the mouthfeel that so many other offerings fail to achieve, and it shares a lot of the winning properties of Athletic’s other NA beers.

Watch Out For: Tasty as it is, it’s not drastically different from other IPAs in Athletic Brewing’s lineup. If you’ve had an Athletic Brewing IPA, expect a similar profile in Flying Start. Also, it’s a limited release for 2021’s Dry January, so scoop it up before it’s gone for good.

Calories: 105
ABV: Less than 0.5 percent
What We Like: It’s not even close. With a good head and subtle notes of sweet chocolate and roasted coffee, Bravus’s award-winning Oatmeal Stout blows every other NA dark beer out of the water.

Watch Out For: Like many other NA beers, this beer is a little watery. If you like Guinness, give it a shot. If you want a full-bodied dark beer to knock you on your ass, you’re reading the wrong list.

Calories: 95
ABV: Less than 0.5 percent
What We Like: Special Effects is the complete package: it successfully tightropes the line between malty and hoppy, and it has the best mouthfeel of any NA beer on this list or otherwise.

Watch Out For: The can says “hoppy brew” but don’t mistake it for an IPA. With notes of black tea and caramel, Special Effects tastes more like an amber lager than any sort of ale.

Calories: <100
ABV: Less than 0.5 percent
What We Like: Growing its Special Effects lineup, Brooklyn Brewery heard the fans’ calls for a non-alcoholic IPA. It’s got a nice bitterness with floral notes and a mouthfeel that makes you wonder if you’ve accidentally popped open the can of a typical West C0ast IPA. But no, this is full IPA flavor and feel with less than 0.5 percent alcohol.

Watch Out For: This is hard to knock — Special Effects IPA may be the perfect non-alcoholic IPA for those trying to get through Dry January or continuing with their sobriety.

Calories: 0
ABV: 0.0 percent
What We Like: This beverage may not taste like a beer, but it doesn’t try to, either; it’s a lightly carbonated black tea made with Simcoe and Citra hops. It’s delicious.

Watch Out For: Drinking at night? Every 16-ounce can has 70 mg of caffeine. (Check out one of HopLark’s other flavors, The Calm One, which has no caffeine.)

calories: 73
ABV: 0.3 percent
What We Like: Another new import from Mikkeller, Drink’in the Sun looks to citrusy wheat ales for inspiration. It’s light in both color and mouthfeel, and you’ll probably want to drink a whole 6-pack when the weather’s right.

Calories: 112
ABV: 0.3 percent
What We Like: Gypsy-brewed at the famous De Proefbrouwerij in Belgium, this newly imported Mikkeller beer balances tartness and acidity with earthy, farmhouse notes reminiscent of graham crackers or baking crust. It’s a wonderful representation of a beer called Flemish Primitive worth seeking out in its own right.

Watch Out For: Calorie counters, beware. This unassuming beer packs more calories per can than a Bud Light.

Calories: 65
ABV: 0.4 percent
What We Like: Credit where it’s due. Compared to other NAs in its weight class — Clausthaller, Heinken, Beck’s — O’Doul’s was crisp, dry and refreshing, not cloyingly sweet and artificially malty.

Watch Out For: Forget about complexity. Old-fashioned O’Doul’s is what you drink when you’re thirsty, not curious.

Calories: 10
ABV: Less than 0.5 percent
What We Like: Partake’s brews offer an impressive amount of flavor considering the simplicity of the ingredients (water, barley, hops, yeast) and the number of calories in each can. The Pale Ale, at just ten calories, is floral and hoppy with delicate hints of lemon peel.

How to Take a Tequila Shot

What Guys Should Know About Beer