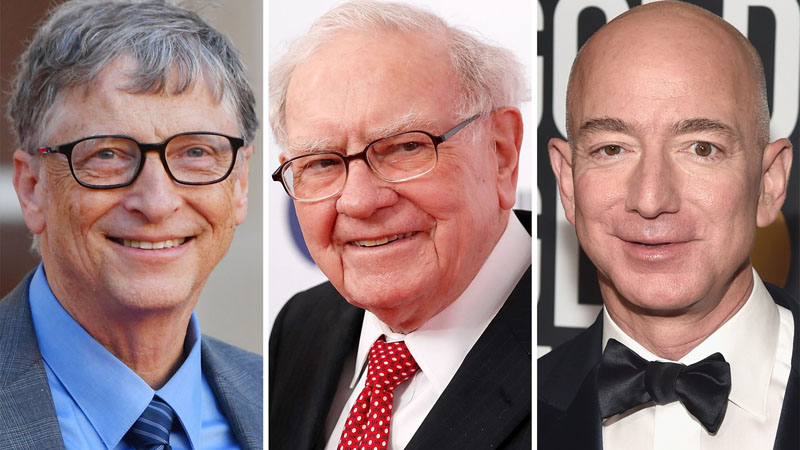 The world’s wealthiest people all have certain things in common: legendary work ethics, breakthrough ideas, and absolute commitment to their companies. At the time of updating this article, all of the top five wealthiest people founded their own companies, and continue to take an active role in the management of their exorbitant wealth.

In 1994, Bezos founded Amazon.com in a garage in Seattle, shortly after he resigned from the hedge fund giant D.E. Shaw. In fact, he had originally pitched the idea of an online bookstore to his former boss David E. Shaw (a rumor that Shaw himself has confirmed), who wasn’t interested.

Though Amazon.com originally started out selling books, it has since morphed into a one-stop-shop for everything under the sun, and is arguably the world’s most important retailer. At any rate, it is hard to dispute its self-description as the “earth’s most customer-centric company.” Its pattern of constant diversification is evident in some of its unexpected recent expansions, which include its acquisition of Whole Foods in 2017 and its launching of its own branded over-the-counter drugs in Feb. 2018.

The only Harvard dropout in the Top Five, Bill Gates’ knack for increasing wealth is staggering, even for an already wealthy guy. The Microsoft co-founder’s net worth has more than doubled since 2009.

Through the Bill & Melinda Gates Foundation, he has also spent billions to fight polio and malaria. Additionally, he pledged $50 million in 2014 to help fight Ebola.

Bill Gates stepped down from the boards of Microsoft and Berkshire Hathaway on March 13, 2020

French national Bernard Arnault is the chairman and CEO of LVMH, the world’s biggest luxury goods company. The company owns some of the biggest brands on earth including Louis Vuitton, Hennessey, Bulgari, Marc Jacobs, Dior, Sephora, and many more.

An engineer by training, Arnault’s business chops became apparent whilst working for his father’s engineering company, Ferret-Savinel. He converted the company to a real estate company in 1976.

Arnault acquired luxury goods maker Financière Agache in 1984, eventually selling all of its holdings other than Christian Dior and Le Bon Marché department store. He became chairman of the board of LVMH in 1989. His own investments are broad, including technology concerns and yacht companies.

The most famous living value investor, Warren Buffet filed his first tax return in 1944 at age 14, declaring his earnings from his boyhood paper route.

He first bought shares in a textile company called Berkshire Hathaway in 1962, becoming the majority shareholder by 1965. He expanded the company to the insurance and other investments in 1967. Now, Berkshire Hathaway is a half-trillion-dollar company, with a single share of stock trading at over $300,000 per share in early 2019.10?

Warren Buffett is widely known as “The Oracle of Omaha” because of his knack for value investing, in other words, finding bargains in undervalued companies. While most investors have been piling into social media companies, Buffett has repeatedly stated that it’s too difficult to determine their value, and has instead stuck with investments that he thinks will pay off 10 years down the road. He is also a noted Bitcoin skeptic.

Buffett is also known for his frugality. At age 14, he itemized his bicycle as a $35 deduction on his first income tax return because he used it for his paper route. He gives much of his wealth to charity, and has said that he doesn’t intend to leave his riches to his children. Between 2006 and 2019, Buffett has given back nearly $34.5 billion and committed to eventually giving away nearly his entire fortune.

Larry Ellison co-founded a database software company, Oracle, in 1977. He stepped down as CEO in 2014 but is still CTO and chairman of the board. He has also served on the board of Tesla since December 2018

Need a New Desk Clock? MB&F and L’Epée Just Launched a New One Shaped Like an Intergalactic Spaceship

Taylor Swift and Calvin Harris Are the Highest-Paid Celebrity Couple