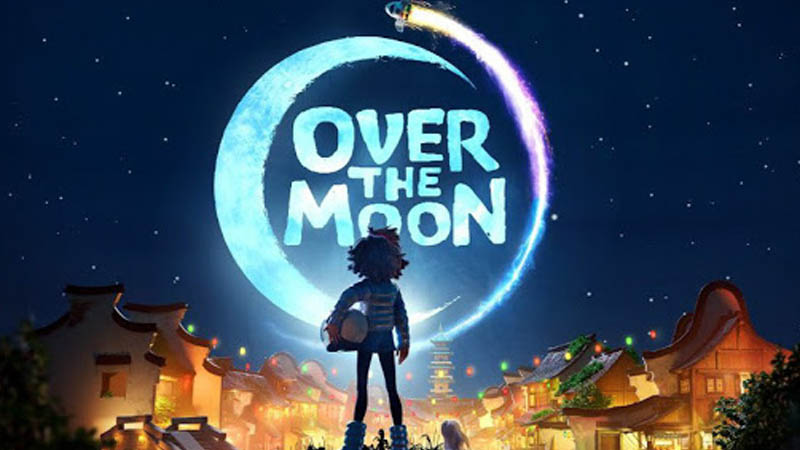 You’ll probably be over the moon with the feeling this movie delivers by the end.

Over the Moon Movie Review Rating: 3.5/5 Stars (Three and a half stars)

What’s Good: Everything that needs to be good in a supremely-packaged animated film – from the voice modulation to the detailing in the expressions of the characters, it packs a bunch of useful things

What’s Bad: The undying regret of missing this on an IMAX screen!

Loo Break: 86 minutes & it has songs, so if you’re someone who feels “why musicals come with songs”, please avoid the film right away!

Starting in a very ‘Up’esque format, we’re introduced with a sweet little happy family who bakes together to stay together. Ma Ma (Ruthie Ann Miles) with a ‘moon song’ sings an age-old Chinese tale of Chang’e (goddess of the moon) and Houyi’s unrequited love story to her daughter Fei Fei (Cathy Ang). Growing older, Fei Fei loses her mother, but she holds on to the Chang’e’s story recited by her.

Living alone for few years, Fei Fei’s father Ba Ba (John Cho) gets attracted to a fellow single parent Mrs Zhong (Sandra Oh), but this doesn’t go well with Fei Fei. Believing in the fairy-tale of Chang’e and how she waited for Houyi for an eternity, Fei Fei decides to go to the goddess of the moon herself for proving a certain point to her dad. How she makes this possible and what happens next is what rest of the story is all about.

If you show me this without telling which production house is backing it, I will bet my life on Disney + Pixar. Keeping all the right things from their universe, this one adds its own magic to be what it is. The pain of losing someone highlighted with a traditional Chinese story won’t make to your bed-time tales, but somehow it does.

Dedicated to Audrey Wells, who lost her life to cancer in 2018, and this is her last film as a writer. Despite many things going in favour of the film, the story remains its soul. It doesn’t take much time to intrigue you, but there are some speed-breakers in between. The graph goes up, stay stable and ends on a high note giving the needed ending to the story.

Cathy Ang is marvellous as Fie Fie! It’s not just about how well her character is written; it’s also about how Cathy plays around it with her voice. She smartly switches the modulation according to the mood of her character, and after a point of time, the lines between character and her voice starts to get blur binding them together. Robert G Chiu’s Chin as the other half of this step-siblings duo is phenomenal. His dialogues come with a very fluctuating tempo which becomes hard for many voice artists, but Robert achieves that smoothly.

Phillipa Soo’s Chang’e goes through a beautiful transition in the film. From what could’ve been pretty average, the writing makes her the heart of the movie by the end of it. Phillipa controls the various moods without any hiccups. Ken Jeong’s Gobi adds the cuteness to the story. He’s what Olaf has been to Frozen. Eve of Killing Eve Sandra Oh gets not has much to play around. Because of her limited character, there’s nothing much to judge or critique or even nitpick.

The former Disney and Pixar employees Glen Keane and John Kahrs have come together for this miraculous attempt at creating the most disney’ist non-Disney film ever. Keeping the emotions in control, Glen makes, and John makes sure to maintain the balance with equally rich visuals. The constant effort of not making it look or feel like other films done in this genre before (ahem… Coco…) is visible and successfully achieved.

Steven Price has proved himself by scoring BGM-heavy films like Gravity and Baby Driver, but was it a worthy decision to bring him on-board for an animated movie relying very much on visuals? YES! He has scored for an animated film before (Wonder Park), and it proved to be an average affair. But he just explodes the orchestra in this one. Without going loud or too cartoonish, Steven adds yet another memorable film to his discography.

Over the Moon Movie Review: The Last Word

All said and done; you’ll probably be over the moon with the feeling this movie delivers by the end. Finding a comfortable place in the list of ‘must-watch animated films’, this one has excellent visuals backed by superlative performances. A must watch!