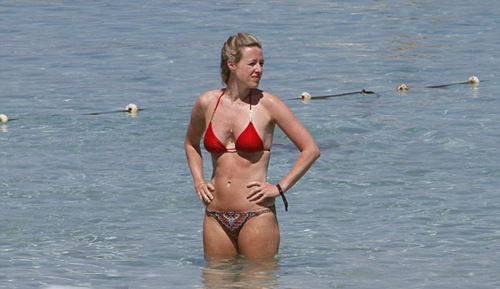 He may not be heading to Brazil with the England squad for the World Cup this summer. But Michael Carrick’s consolation prize could’ve been a lot worse than a sun-soaked holiday with his wife Lisa in Ibiza.

The 32-year-old footballer – who has been married to the pilates instructor since 2007 – took some relaxing time out with his other half on Wednesday. Despite missing out on a place in the England squad, the Manchester United midfielder still looked in tip-top shape as he flaunted his toned torso while standing next to Lisa in the sea.

Aside from his wife, the star only had a tiny pair of blue swimming shorts and a pair of sunglasses for company as he soaked up the rays. The blonde went for a mismatched two-piece bikini courtesy of a red top and patterned bottoms.  Lisa looked to be having a great time as she chuckled while standing alongside her husband.

Her choice of swimwear also enabled her to showcase her impressively toned and tanned tum. But Lisa also ensured she didn’t get too burnt as she was seen applying suntan lotion to her cleavage at one stage.  Michael is not the only England footballer who has been spotted out and about with his WAG in recent weeks.

Andy Carroll, who is on stand-by for the nation’s World Cup squad should one of the strikers get injured, has been enjoying some time out with his girlfriend Billi Mucklow in Dubai. What’s more, Peter Crouch was seen paddle-boarding with his wife Abbey Clancy in Hawaii on Tuesday.